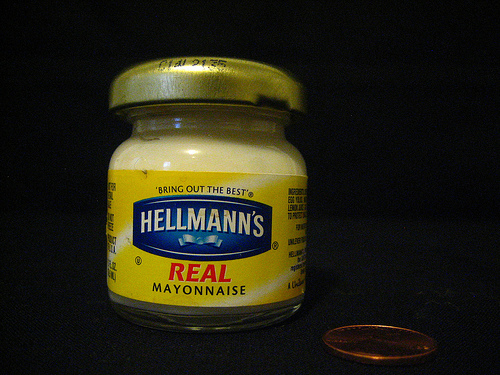 [The auction for this object, with story by Rick Moody, has ended. Original price: free. Final price: $51.00. Significant Objects will donate the proceeds from this auction to Girls Write Now.]

Guy comes on the train, Sunday morning, I have slept one hour, I think, *#%$!, here I am again, hostage to some psychotic mother*#%$er who is going to give me the whole *#%$!ing if-only-I-will-be-reborn thing, I have no patience, not another ounce, and it’s going to be one of those *#%$!ing guys who has to confront every passenger, for example my sleeping daughter, *#%$!, and I’m going to have to strangle him, she’s been up all night, screaming like a stuck pig, and of course I feel sympathy, because–*#%$!–what person would not wake up screaming if he or she tore aside the *#%$!ing veil a little and saw what there was to see out in the world, horror and shame, the great palette of cruelties, I mean, *#%$!, I’m bracing for the worst, therefore, remedial lessons in reading the New Testament conspiracy theories, Tea Party rhetoric, after which my daughter will awake, screaming, and I just want to say *#%$!, don’t do it, of course he has the wild staring eyes indicating that he can keep the symptoms in check only for the duration of his screed, and he won’t be able to resist chucking my daughter under the chin with infected hands, but instead of saying anything about the N.T., or the Flight Out of Egypt, what he says is, you put that on your sandwich? That nasty stuff? Do you have any idea what is in that? and I guess he’s talking about the consistency of the product he has apparently foresworn, and I suppose if I had to think about the *#%$!ing liquid mechanics of this product, I would never eat it either, and he goes on about how it ruins every lunch preparation that it adorns, like if you put it in a sandwich it’s all clotted together, like what’s in a baby’s diaper, and, *#%$!, I’m really worried that this is it, insane ranting about lunch foods, a plague of frogs, psychotic dude coming straight for me and my kid, because of the diaper reference, he sees her, and she’s a sympathetic audience, a diaper consumer, and I’m thinking like how many *#%$!ing steps to the emergency break, what kind of guy talks about this on a Sunday morning, lunch foods, the illuminati, and there’s some kind of racial profiling happening, too, but he’s polite enough to avoid saying it, but you can tell that he’s thinking it, which is that me and the other crackers on the number two are all implicated in this product, *#%$!, like we probably work in some kind of support business, you know, whether it’s the promotion or the public relations sectors, consulting for some food conglomerate owned by a defense contractor, it all kinda culminates, when he whips out the jar of the stuff, from some pocket in his overcoat, *#%$!, can’t even talk about it, because it’s really an old jar, probably exhumed from a time capsule of foods that white folks revere, he goes on again, Certain things can be forgiven, you know what I’m talking about, we got to be able to meet up, in God’s kingdom, but this just has to go, and then, with a big electrifying smile, the guy starts in which You Send Me, by Sam Cooke, and actually he has good phrasing, and he knows all the verses, and even though I still think the guy is deranged his rendering is spirited enough,that it does wake my daughter, she just laughs and laughs, and on the way to the next car he leaves his jar behind. 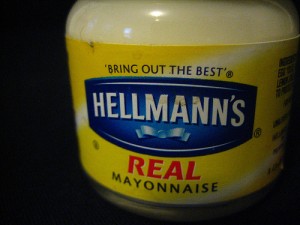 Rick Moody is the author of four novels, three collections of stories, and a memoir, The Black Veil; his forthcoming novel is entitled The Four Fingers of Death.

4 thoughts on “Tiny Jar of Mayo”