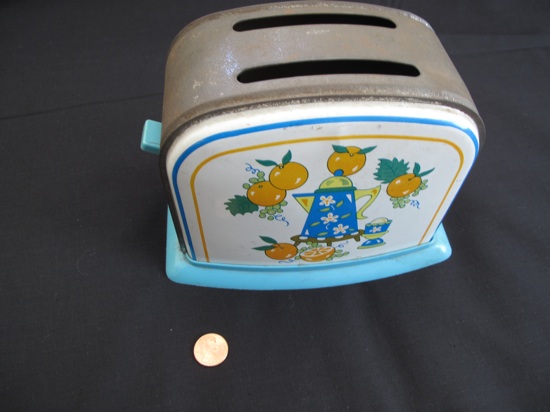 [The auction for this Significant Object, with story by Jonathan Goldstein, has ended. Original price: $2. Final price: $6.25.]

Twenty years after the man’s death, I still can’t rightly say whether my uncle Dwayne was a benevolent old-timey Grandpa Walton type or a secret sadistic performance artist. By the time I met him, Dwayne was a retired concierge with shaky hands. He claimed it was because of the heavy vibrating machines he employed to polish banisters. When he affectionately placed his large hand on your shoulder, it felt like a gentle shower massage. Another thing I still remember about Dwayne was that he always had for us a pocket full of tiny unwrapped butterscotch candies that all stuck together, we suspected, because he’d begun to suck on them and had stopped half way through.

Every year, for each of our birthdays, Dwayne presented us with a toy made to mimic some common household appliance. On the occasion of my cousin Bernice’s birthday, he presented her with a toy hot plate that pretty much looked like a regular hot plate to the last detail— except for the fact it didn’t work.
“Why not just give a real one,” asked Bernice. “It’d be fun to bring it to school and make pancakes for lunch.”

She conceded the point, but really, there was very little that was toy-like about his gifts. One year he gave my brother Charlie a “toy” vacuum cleaner. It was exactly like a real one, weighing about forty pounds. Thing was, it didn’t work. To make it more child-friendly, Dwayne had drawn tremulous polka-dots all over it with his palsied hand. Charlie loved it. Over the years, Dwayne presented us with, among other things, a toy coffee maker (the pot filled with all white gumballs), a toy toilet plunger (wrapped in colourful tinsel), a toy mop (that smelled of real sewage), a toy caulking gun (in a little toy holster he’d made out of red electrical tape), and a toy steak knife set that we used to eat make-believe cutlets.

The toaster, pictured, was given to me for my seventh birthday and it was always one of my favourites. On the day he gave it to me he asked several questions:

“And how do you spell what you put in a toaster?”

“Wrong!” he said, the word sounding like an electrical buzzer going off. “B-r-e-a-d. Bread goes into a toaster. Toast comes out.”

But the thing with a toy toaster is that bread goes in and bread comes out. There’s something refreshing and unexpected about that. I remember many afternoons spent gazing into the slot and really hoping that I might see the inside slowly growing orange with heat. So think of this as a kind of exercise machine — not for the tightening of your buttocks or the growth of your biceps — but for the strengthening of a more childlike muscle: your capacity for hope.

Maybe Uncle Dwayne was trying to teach us that things have a value that transcend what they’re actually able to accomplish. But more likely than not, he was unloading junk he no longer needed.

Jonathan Goldstein is the author of Ladies and Gentlemen, The Bible!, a book of stories retold from the Old Testament.