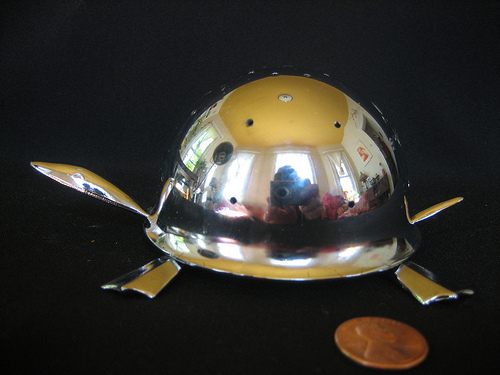 I bought this chrome turtle from the first girl I ever loved, five years after I’d stopped. She was having a yard sale. I didn’t know it was her yard. I just caught a glimpse from across the street and saw there were sweaters, so I decided to check it out.

The clothes were all women’s. I would have kept walking, except I knew I’d seen some of these sweaters before. There was also a pair of boots that rang a bell for me. Looking through the CDs in the Seagram’s box on the ground, I thought I was reading the track list from a mix she made me once. When I spotted the chrome turtle on the knick-knacks table I was ready to solve the puzzle.

“I haven’t seen this since you tossed it at my head,” I said. She turned around and flared her round little eyes and asked me how I’ve been.

“How long have you lived in this neighborhood?”

Apparently, we’d been neighbors for two years without knowing it. When I thought of her I pictured her still in that same apartment, everything exactly as it was when I left, and all of it a thousand miles away. Yet here we were subject to the jurisdiction of the same community board.

“Won’t be neighbors for long,” I said. I was moving out of my roommate situation and into my girlfriend Paula’s place. Paula owned.

“Looks like,” she said. She was moving out of her studio and into her boyfriend Max’s place. Max inherited.

“I’ll take it,” I said, holding up the turtle. She offered to give me a freebie, saying there might still be some of my blood on one of the feet, but I insisted. She charged me two bucks and my cell phone number.

We never even got the boxes unpacked. At first we’d do it at Paula’s, since Paula’s schedule was more reliable than Max’s. Then we fought about risk-sharing, so we started doing it at Max’s, but only when he traveled.

Paula refuses to tell me how she found out. I assume she followed us. I came home from Max’s one night and Paula was on her feet in the entranceway, waiting to say she knew all about it. By the end of the night, two things happened. I agreed to move out, and I received my second crack in the head with the chrome turtle.

I still don’t know if Max knows. There was one last phone call to shut it all down and we haven’t spoken since. She might try and stay with Max and I’m not going to stop her. I’m too busy looking for a new place and trying to sell some of my stuff. Starting with the chrome turtle. It’s been washed, FYI. 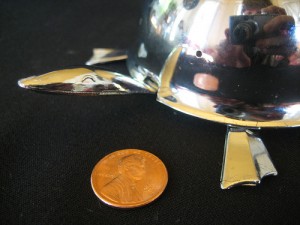 Bob Powers is the author of several humor books. His website is bobpowersonline.com.