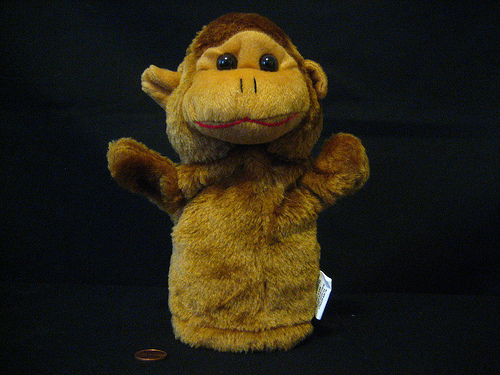 [The auction for this object, with story by Dara Horn, has ended. Original price: $2.99. Final price: $47.20. Significant Objects will donate the proceeds from this auction to Girls Write Now.]

Among Franz Kafka’s possessions upon his death from tuberculosis in 1924 were many unpublished manuscripts and personal effects, all entrusted to the novelist Max Brod, whom Kafka had appointed as executor of his estate. In his will, Kafka specifically instructed Brod to burn all of his manuscripts, an order which Brod chose to defy. No instructions were provided regarding Kafka’s personal effects.

In addition to The Trial, Kafka at the time of his death was also at work on another manuscript, tentatively titled Metamorphosis II: Monkey Puppet. A sequel to The Metamorphosis, Metamorphosis II continues the story of the surreally afflicted Samsa family. After Gregor the cockroach’s death and Mr. and Mrs. Samsa’s relief as they notice their daughter Grete’s blossoming young figure (“they had come to the conclusion that it would soon be time to find a good husband for her”) in the final pages of Volume 1, Metamorphosis II resumes ten years later, with Grete Rosenzweig, née Samsa, as a discontented hausfrau and indulgent mother of three in Prague. In the opening paragraph, Grete Rosenzweig awakens from uneasy dreams to discover that she has been transformed into a plush puppet belonging to her surly and ungrateful six-year-old son Adolf. As young Adolf begins a systematic program of sadistic destruction of his playthings, Grete reconsiders her approach to parenting while pondering the absence of God.

“Franz should have appointed another executor if he had been absolutely and finally determined that his instructions should stand,” Brod later wrote. “But when I read Monkey Puppet, I immediately saw a way to honor his wishes.”

In this fashion Metamorphosis II: Monkey Puppet was lost to the ages, along with several pages from Kafka’s diary that referred to Brod’s wife as “obtuse.” Today only the puppet itself remains, silent witness to the limitations of art.

Dara Horn's third novel, All Other Nights (Norton), about Jewish spies during the Civil War, is out this week in paperback. Reviews, tour information, and the first chapter are available at www.darahorn.com.

One thought on “Monkey Puppet”