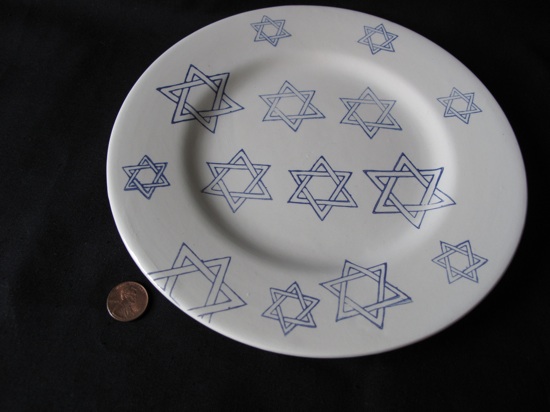 [The auction for this Significant Object, with story by Adam Harrison Levy, has ended. Original price: $2. Final price: $15.50. This story was part of a special collaboration with Design Observer, where it is co-published here.]

Now that Budd Schulberg has died, the story of how I stole this plate from him can finally be told. I was researching a documentary film and I had taken a bus out to his house on Long Island in order to interview him. Schulberg wrote the screenplay for On The Waterfront (“I coulda been a contender”), named names for the House Un-American Activities Committee and, during World War Two, arrested Leni Riefenstahl, the famous filmmaker. Not many people know that.

These things represent the defining moments of my life. By stealing objects from people whose lives have been important, I celebrate my encounter with them (at least that is what I tell myself in order to explain what otherwise might be termed theft). A Kleenex is a Kleenex (even when smeared with lipstick) but when its Debbie Harry’s Kleenex, it becomes truly important, and it gains even more importance when it joins Belafonte’s pen and Minnelli’s ashtray in my collection. Right?

So it was a crisp fall afternoon and I had taken the Hamptons Jitney out to see Schulberg, who lives near the ocean. He picked me up in his car. He was ninety-two at the time, and his head just about cleared the dashboard. We made it back to his house more or less in one piece.

We sat down in his living room, which was a jumble of really great stuff. On the mantelpiece was his Oscar for On The Waterfront (patina chipped and damaged and way too obvious to steal), a signed photograph of F. Scott Fitzgerald (framed and therefore too clunky), and a number of seashells (too cute).

I asked Schulberg questions about his life. During World War Two, he had been a member of John Ford’s film unit. His mission was to find and edit Nazi film footage to be used during the Nuremberg Trials. It was the first time that film was used as evidence in an International Court of Law. I was impressed. My own work demands that I view video clips on YouTube.

While he was talking, I spied the plate — which contained some loose change and three paperclips — on the credenza. Something about the simplicity and modernity of its shape reminded me of an Eero Saarinen Tulip Table. The artfully incoherent placement of the stars was like a Dada backdrop. The plate was clearly mass-produced. It called out to me. When Schulberg doddered off to take a leak, I slipped the plate — change, paperclips, and all — into my bag.

Adam Harrison Levy is a writer and documentary film-maker. He has worked on a wide range of historical and arts films, primarily for the BBC. He is a contributing writer for Design Observer.

One thought on “Star of David Plate”