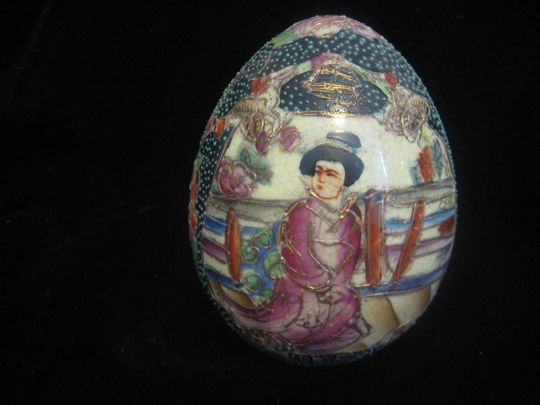 [This is the first of two stories created for Significant Objects by participants in Thumbscribes, a collaborative-writing platform. Thumbscribes is auctioning this object here, and will give proceeds to a charity or nonprofit of its choosing.]

I was born on 11/11 at 11:11 and there is nothing extraordinary about my life. We live in an ordered universe where patterns and co-incidences are bound to arise. The Chinese egg was different. I first saw it at my psychoanalyst’s office above The Ear Inn. It was planted by him, of course. A strict Freudian, he believes that there are no accidents, and when he can, he makes sure of it. Placed on the bookshelf just over his right shoulder, in my eyeline. I struggled not to laugh. A maternal figure, on an egg, of all things. Obvious, even for him. His polished scalp comically mirrored the shape of the object. I began to wonder of the similarities between the human brain and an egg, specifically of the hidden being inside one’s mind, yet to form, but when it does — turns into an animal independent of the body. Then it hit me.

Square across my face. In the throes of such a metaphysical quandary, I didn’t see that egg coming. “You must free yourself of all that Oedipal guilt,” said Dr. Ljunggren in his thick Swedish accent as the oval object bounced off my cheek. My child’s failure-to-thrive syndrome was no fault of mine. I stood up, albeit a little shaken, walked over to where the ornament had landed and picked it up. The Doctor was prone to have these dramatic outbursts and I was becoming well-versed. I replaced the offending object and returned to the chaise lounge and reclined. My gaze was drawn back to the ceramic egg while I proceeded to answer Ljunggren’s questions about my week, developing relationships, occasional instances of distress and other nuances. I traced the egg’s decorative embellishments, following golden outlines across its painted surface while I spoke. Ljunggren, the unrivaled master of the uncanny, was getting increasingly agitated that I had not reacted to or acknowledged the egg incident. I was wrong to have confided in him about my reoccurring deja vu with the egg. He was part of the collusion. I felt uncomfortably strange and oddly comforted.

“It’s just that the Geisha looks so well fed Doc,” I said with a quiver in my voice, as I gawked at her pasty white complexion. Ljunggren raised his right eyebrow and stated: “And brimming with innocence and purity,” as he stroked his pointy goatee. I began to feel a slight swell occurring on my face. Ljunggren and the elephant in the room were suddenly completely transparent. He needed my neurosis about the egg as much as he needed a reason to get up in the morning. “Sometimes a cigar is just a cigar,” I said, walking on egg shells out the room. “And an egg is just an egg,” Ljunggren wisecracked. 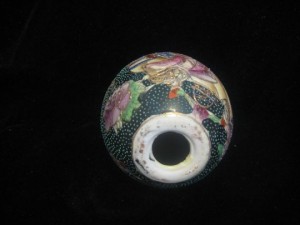