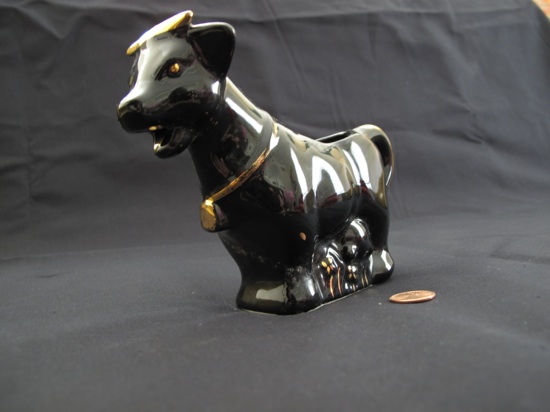 [Bidding on this Significant Object, with story by Lucinda Rosenfeld, has ended. Original price: $1. Final price: $26.]

My grandmother, Zippy Friedman, was an administrator at Austen Riggs Psychiatric Hospital in Stockbridge, MA, for several decades beginning in the 1950s. She was also a close friend of artist Norman Rockwell and was instrumental in having him admitted there during a particularly gruesome bout of depression. (Yes, the acclaimed illustrator of those aggressively cheerful Saturday Evening Post covers suffered from chronic depression.)

Anyway, for whatever reason, Norman brought this golden cow creamer with him to Riggs—and then failed to bring it home. Which is how it ended up in my grandmother’s kitchen in nearby Pittsfield, where it sat on the windowsill next to a Provencal Rooster (also made of porcelain) until her death in 1983. What’s more, according to my mother, at some point my grandmother started referring to the creamer as “Norman,” as in, “Let’s all have tea—someone grab Norman.”

Which makes me wonder if something bad happened between them. Why? If you can’t tell from the pictures, the cow’s got a pretty angry and unforgiving look on her face. And, depressed though he frequently was, the real Norman Rockwell was apparently a delightful, kind man. (Mysteries never cease.) So anyway, my young daughter told me she finds “Norm” scary. And we get our hot beverages to go — at Starbucks. But he really is a piece of history. No chips. Lovely glaze intact. Pours well.

Lucinda Rosenfeld’s new book — I'm So Happy For You: A Novel About Best Friends — will be published in July by Little Brown.