It occurs to me that you could set a table with the 16-odd items of dishware that our participating authors have so brilliantly and entertainingly significated. Here’s what such a table might look like. 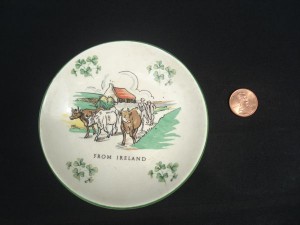 The narrator of Sarah Rainone’s first-person story picked the Ireland Cow Plate up at a mysterious general store because “there was something about it that was both Indian and Irish, something that transcended the religions that divide nations and men.” 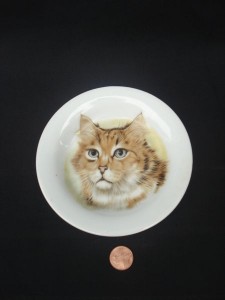 James Parker’s hardboiled character Floyd Haruspex muses, regarding the Kitty Saucer, “Why had someone left it in his car last night, this little milk-saucer with the face of a cat painted on it?” 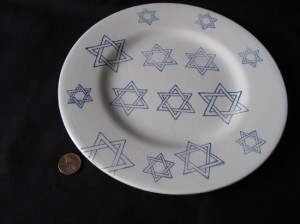 “Now that Budd Schulberg has died, the story of how I stole this plate from him can finally be told,” writes the narrator of Adam Harrison Levy’s “Star of David Plate” — published a day or two after Schulberg died. 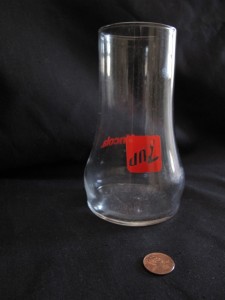 The narrator of “Uncola Glass,” by Jen Collins, recounts that she received this object as an “abandonment present,” at age 13, from a father whose general disposition of wiseassery had positive and negative aspects. 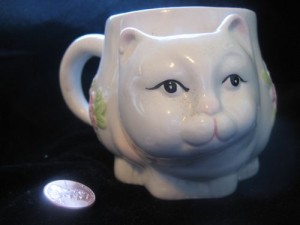 Thomas McNeely’s story, “Cat Mug,” claims that this mug’s only redeeming aesthetic feature is “the patina of mold we were never able to wash from the right side of its nose,” which at least “offset its louche, ridiculous, wall-eyed gaze.” 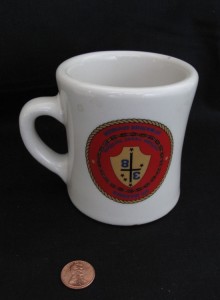 The Marines (Upside-Down) Logo Mug inspired Tom Vanderbilt to write a story from the perspective of a systems operation manager for a custom-printing operation, a man so efficiency-obsessed that his personal philosophy is downright aerodynamic: “He wanted his surfaces clean, his leading edges freed from drag, he brooked no laggards in his drift.” 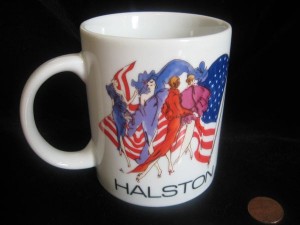 Mimi Lipson’s story, “Halston Mug,” offers an excerpt from the lost diaries of Andy Warhol, in which the Pop Art maestro marvels at a mug he receives as a party favor from the fashion designer Halston: “Mugs, like from a truck stop. They had wavy American flags on them, too, and when I asked Halston why they had the flags, he said, ‘Don’t you think it makes them so much more butch?'” 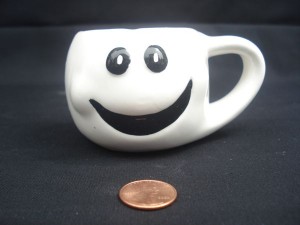 Ben Greenman’s story claims that the Smiling Mug was crafted by the Belgian surrealist Paul Coppens, in 1932 — and that it is “best known from its appearance in the ’39 film No News From The Navy.” The image above appeared on countless blogs when the Significant Project first launched, this past summer; it was quite wrenching to ship the mug up to its new owner! 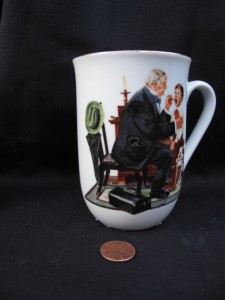 BONUS: The Country Doctor Mug shown above, which was decorated with a drawing “inspired by Norman Rockwell,” was offered to a few Significant Object participants, but nobody wanted to write a story about it. I grew to loathe the mug, and finally I hurled it into the garbage. Perhaps that was rash — an object that inspired such a strong visceral reaction surely had something to teach me. 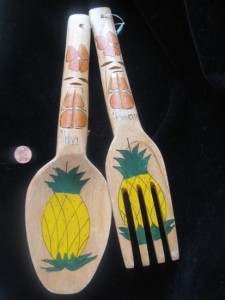 These Hawaiian Utensils aren’t particularly serviceable, but they’re the only utensils we’ve got. Stephen Elliott’s narrator bought them in Alaska: “How the utensils migrated their way from those warm pacific islands to the furthest outpost of civilization is beyond my knowing. And when the military men showed up in their snowcats and my wife climbed on the back of one of their vehicles, that was beyond my knowing, too.” 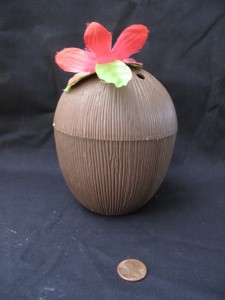 It might be stretching the definition of “dishware” to include this novelty item, yet surely it was fashioned for the purpose of holding beverages. Annalee Newitz’s SF story about the Coconut Cup recounts that it once belonged to a “video celebrity” who “took one of the first cruises to the ‘beach floating in space,’ before the horrible accident that led to today’s atmosphere bubble regulations.” 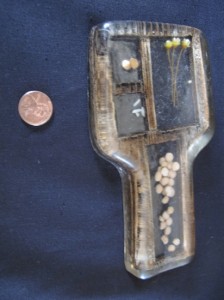 When Joanne McNeil chose to write about this object, we had no idea what it was — that’s why we named it the Grain Thing. McNeil’s narrator tells us that the Grain Thing is an example of his great-grandfather’s “surrealist craft art,” and that it was inspired by the example of his friend, the artist Joseph Cornell. We’ve since been informed that it’s one of those doohickeys you rest a wooden spoon upon, while cooking. 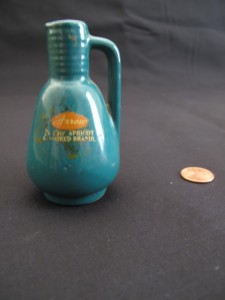 You can’t drink much out of the Miniature Bottle (really a jug?), nor would you want to once you’ve read Mark Frauenfelder’s story, in which a fellow named Matt steals the bottle from a homeless man — only to discover that the object comes with a terrible curse: “He ran down 5th street, throwing the bottle onto the sidewalk every time it appeared in his mouth.” 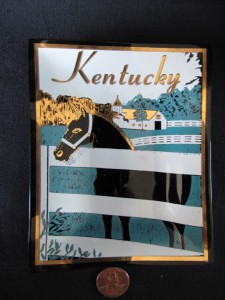 You aren’t supposed to eat food from the Kentucky Dish — though it’s probably meant to hold candy, or nuts. Dean Haspiel spins a yarn about adultery and alien abduction, at the end of which the dish (SPOILER ALERT) ends up being smashed. Though in real life, the dish remains intact. Readers might not have found it easy to separate fact from fiction — the object sold for a mere $6.75, which shocked us. 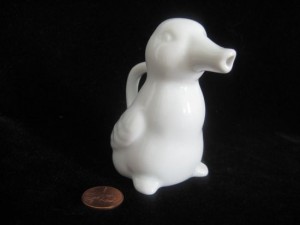 The Penguin Creamer has inspired a certain amount of controversy, but that’s beside the point. Sari Wilson’s narrator notes that she and her ex “treated it with the scornful irony we began to feel for each other,” while her new boyfriend “pours cream from its spout and says, ‘Cute little guy.'” 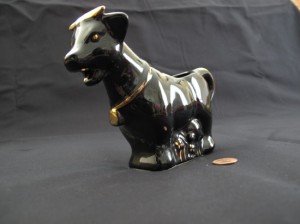 The Creamer Cow, finally, was abandoned at the Austen Riggs Psychiatric Hospital in Stockbridge, MA, by Norman Rockwell. (See note on Country Doctor Mug, above.) Or so we learn in Lucinda Rosenfeld’s story, whose narrator suggests that the creamer cow has “a pretty angry and unforgiving look on her face.”

NOTE: None of the objects pictured in this post are among this experiment’s Top Ten highest-selling objects. Several figurines made it onto that list, but not one piece of dishware. Do you suppose this trend is a revealing one?

One thought on “Significant Dishware”