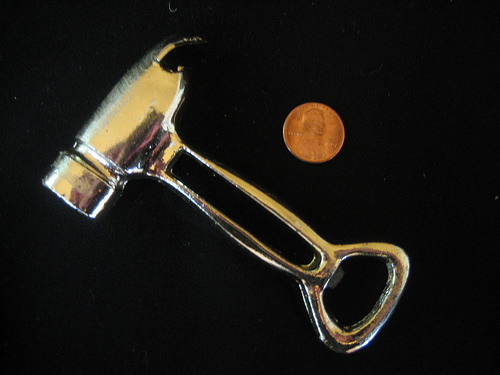 So Mel liked to call himself “The Hammer.” It was sobriquet few used except Fran who worked at the Texaco. Every other Friday night, after a few shots of Mel’s plastic bottle scotch and a joint she herself sold on the side to a few customers not named Mel, Fran would holler “Hammer me!” while Mel was on top of her. Mel took his name from a golden bottle opener with a small hammer on the other end he won at the VFW North Georgia Bowling Championship in 1984. Mel had very little use for the bottle opener side, thinking any beer not sold in a can “pussified.” Mel did like to use the claw side of the hammer to smash open a suck hole and a vent hole in the top of his oil cans of malt liquor, eschewing the standard pull-tab approach. He did this absolutely every time he thought anyone was looking.

Everything changed on July 4, 1992. Mel was an intimidating man, 300 pounds of beer, gut, and muscle. He liked to tell people about his time on the Mekong in Vietnam, although he really spent the war as a Ship’s Serviceman cutting recruit’s hair in San Diego. Steve, on the other hand, was a Marine who had been in the Gulf, although he had never fired his weapon in anger. He had just ended his four years of sand, sun, and fun, and was visiting his parents in Winder, GA. Their paths intersected at a picnic at Fort Yargo State park.

There were about thirty people at he picnic. Twenty-nine of them knew not to touch Mel’s hammer. The other one was Steve. He noticed the bottle opener on a side table next to Mel. He picked it up.

Steve looked at him blankly, not knowing who he was talking to, or what Mel was talking about.

When Steve neither responded, nor replaced the hammer, Mel climbed out of his obviously relieved beach chair. Once erect he rolled his shoulders for effect.

“You don’t listen too well, do you?” he said. Then he swung.

Trained as a barber and a beer drinker, Mel was leaning heavily on reputation and intimidation. Steve went instinctively to his close quarters Marine training. He slapped Mel’s pudgy arm to one side and jabbed him in the throat. It turned out that most of Mel’s 300 pounds was beer and gut. Mel went down quicker than the spare that won him the VFW championship.

As a result Mel never again brought the hammer to a barbecue. Steve was apologetic, and never returned to Winder for a holiday. Mel’s relationship with Fran did improve. She found his new, more gravely voice sexy, although she had to come up with a different sweet nothing for the sack.

Alexander Chapman is recently retired from the United States Navy. Last year he was the 382nd person to receive a heart transplant from Saint Joseph's Hospital in Atlanta. He is currently trying to get published by hook or crook.

One thought on “Hammer Bottle Opener”