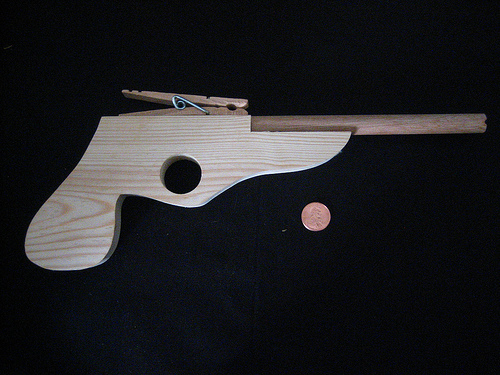 [ The auction for this object, with story by Benjamin Percy, has ended. Original price: $1.50. Final price: $63.50. Significant Objects will donate the proceeds of this auction to Girls Write Now. ]

I brought to school a rubber band gun I bought at the mall. I bought it at that store with the tarot cards and the stink bombs and the beer T-shirts and the posters of women in thongs bending over on beaches with sand stuck to them in all the right places. So I brought to school the gun and showed it off to Stacey Swanson. I was a little in love with her. By that I mean I regularly jerked off into an athletic sock when thinking about her naked.

Normally she would not talk to me except to say, “Don’t even talk to me — you haven’t even gone through puberty yet.” But this time, when I held out the rubber band gun, she said, “Let me see that.” She grabbed the gun and weighed it in her hand a moment before lifting her arm and staring down the line of it and shooting me directly in the eyeball.

The eyeball did not fare well. The rubber band hit the pupil directly, punctured it, buried itself like a worm. The doctor removed the eyeball and put it in a bottle of formaldehyde. I keep the bottle on my dresser. I can tell the temperature by the eyeball, its buoyancy. Whether it is up or down makes me throw on shorts or a sweatshirt. Sometimes the eyeball seems to stare at me. And sometimes, when the pressure drops and a thunderstorm rolls through, the eyeball spins in circles like some possessed weathervane.

Every night I clean out the socket with a warm washcloth, a squirt of soap. There is a smell otherwise.

Used to be, people would make fun of me, a little rough in the hallways with their shoulders, a shove at the urinals. Now nobody touches me. They call me Cyclops and they beg me to lift my eyelid, show them the scooped-out socket. Sometimes I do.

I put things in the socket. A penny. A marble. A strawberry. You should have seen the look on Gabby’s face when I walked up to her desk and without a word dug into the socket and pulled out the mushed-up strawberry and popped it in my mouth to swallow.

Other things, too. Like a tongue. Stacey Swanson’s if you can believe it. Ever since she shot me in the eyeball she has been touching me on the shoulder, asking, “How are you today, Jimmy?” One time she asked if there was anything she could do for me. I said there was. She said, no, not that, that was terrible — that was the most disgusting thing she had ever heard. But I said please, it would mean a lot to me, and offered her the forty dollars I had swiped from my mother’s purse.

She wiped her mouth afterwards and demanded the money and ran from me crying and I stood there, behind the school dumpster, breathing heavily and shaking with an electric pleasure that I never would have experienced had it not been for the rubber band gun.

Benjamin Percy is the author of a novel, The Wilding (forthcoming from Graywolf in fall of 2010), and two books of short stories, Refresh, Refresh, and The Language of Elk.

One thought on “Rubber Band Gun”