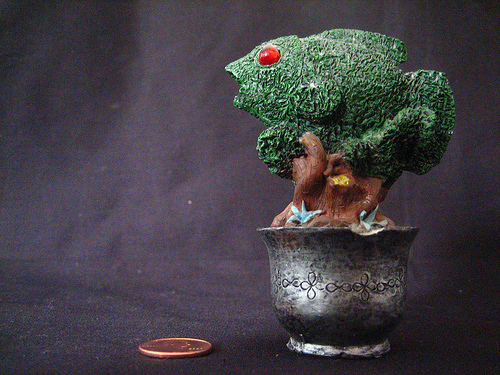 After the death of his older brother, Yuri III, in 1328, Ivan I of Moscow took up the throne of the Russian Empire, as well as residence in the royal palace. Yuri had been a well-known lover of aquatic life, and Ivan found that the private quarters of the palace were home to a staggering array of fish, some already suffering from obvious neglect in the absence of their exalted caretaker. Ivan lived up to his epithet, “the moneybag,” and had the private aquarium moved to sumptuous new quarters in the city center and provided for in perpetuity, thus establishing the first public Aquarium on the continent.

Yuri’s love of fish had also influenced his decorating scheme, most of which Ivan changed to suit his own taste, but the younger brother kept a single, fish-shaped topiary in the royal gardens as a tribute.  When Ivan’s son, Simeon (“the proud”) succeeded him, he was unaware of the familial provenance of the fish-tree, but fond memories of a childhood spent playing in its shade, and spinning fanciful tales about its mystical powers, led him to maintain it through his own sweeping redesign of the palace grounds.

When they married, Simeon’s first wife, Eupraxia of Smolensk, brought as a dowry The Fire of Minsk, at the time the most celebrated ruby in existence. He was so enamored of the gem that, even after rejecting Eupraxia for her frigidity in the marital chamber and remarrying, he refused to return The Fire. Paranoid about theft, or a chivalric attempt by Eupraxia’s family to retrieve her birthright, Simeon decided to hide it. He hired a craftsman, whom he had exiled afterward, to cast hundreds of tiny replicas of Yuri III’s beloved topiary, fitting all but one with ingenious paste reproductions of the ruby as the fish’s eye. (It should be noted that the original topiary itself had no eye to speak of.) The last, marked in a way that only Simeon himself knew, contained the Fire itself.

Before his death in 1353, Simeon took monastic vows, renouncing all wordly wealth, and spread his tiny topiaries to every corner of the Empire, never intimating to a soul which one held the real thing or how to tell. The ruby’s location is still unknown, but many of the fish still survive in private hands, and any one of them could contain The Royal Fire of Minsk in its unblinking eye. 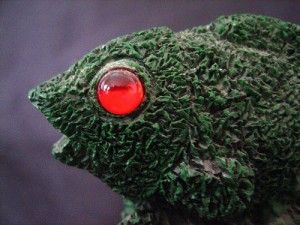 Sam Means is a writer for The Daily Show with Jon Stewart.