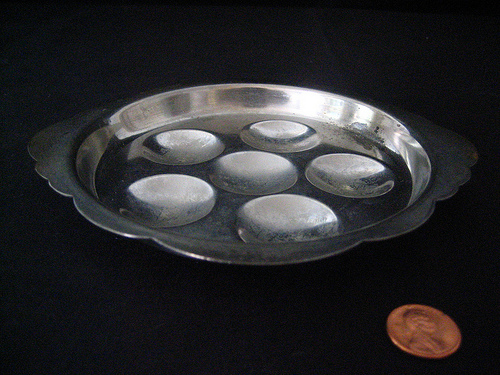 [The auction for this object, with story by Scott Jacobson, has ended. Original price: 99 cents. Final price: $22.72. Significant Objects will donate the proceeds of this auction to Girls Write Now.]

Donald “Dax” Florin stood behind the bar, balancing the hard-boiled eggs. Dax — 44 years old, face just a lifestyle change or two away from being handsome in a Treat Williams kinda way — placed the eggs upright on a small metal dish. There they sat: six little Dax-directed insults, dumpy and lazy in their stupid egg craters, like fat kids strapped in and waiting for a carnival ride to start. Dax flipped a tin cocktail shaker in the air and caught it behind his back peevishly.

Dax was a “flair bartender”. Which is to say he tossed stuff around. Dax did bar tricks because he was good at them. And because his acting career was pretty much kicked. Jesse, the owner, got annoyed whenever Dax skipped limes or lobbed shakers or sent a Grey Goose bottle spinning into a triple axel. Dax didn’t care what Jesse thought about his flair bartending. But this egg plate was a problem.

For all his talent, Dax could not work the plate into his routine. He’d tried spinning it, but the plate — too light, obviously not manufactured to the rigorous technical specs so crucial for stunt-serving — just wobbled arhythmically on Dax’s finger before clattering on the bar. And the eggs themselves were perfect for juggling, but what was Dax, a clown? Not to mention the obvious egg symbolism, hardly lost on a guy who’d taken his share of Joseph Campbell-larded screenplay seminars, of birth and renewal. These eggs were taunting Dax, and his increasingly ovoid gut, and his dead career.

But eh, thought Dax. Maybe I’m reading too much into these eggs.

Two guys walked into the bar. One was dressed in a suit, the other was… somebody.

Jesse leaned over the bar and whispered: It’s Dax Shepard!

Dax grunted acknowledgment as Jesse shifted into kiss-ass mode, fist-pounding the young actor, racking his brain for obscure cameo performances to praise. Dax the Elder did what he always did when he felt awkward and uncomfortable behind the bar: he spun two liquor bottles by his hips like smoking six-shooters.

Dax Shepard didn’t laugh. He didn’t smile. But Dax the Elder thought he saw something cruel in his eyes. He spun the bottles faster.

Jesse laughed: Someone’s in the mood to perform!

Dax tossed a bottle of Prosecco over his shoulder and caught it. He took two beer bottles by the necks and twirled them like drumsticks. He reached for the little metal egg dish, balanced it on his finger, and spun it hard.

Eggs shot off in all directions. One hit Dax Shepard’s sharply dressed companion. One, blessedly, hit Jesse. But even amid the chaos and shell shrapnel, Dax Shepard went unscathed. Dax the Elder took a breath. He thought about stuff, all kinds of stuff. He ran a hand through his hair. Then he fixed Dax Shepard in his sights, and flung the metal dish like a Frisbee at the actor’s forehead. 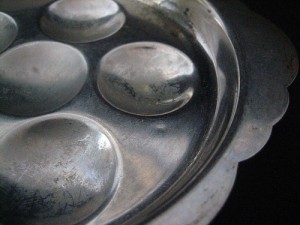 Scott Jacobson is a former writer for The Daily Show, now writing for Bob's Burgers, an upcoming animated show on Fox.

One thought on “Metal Dish”