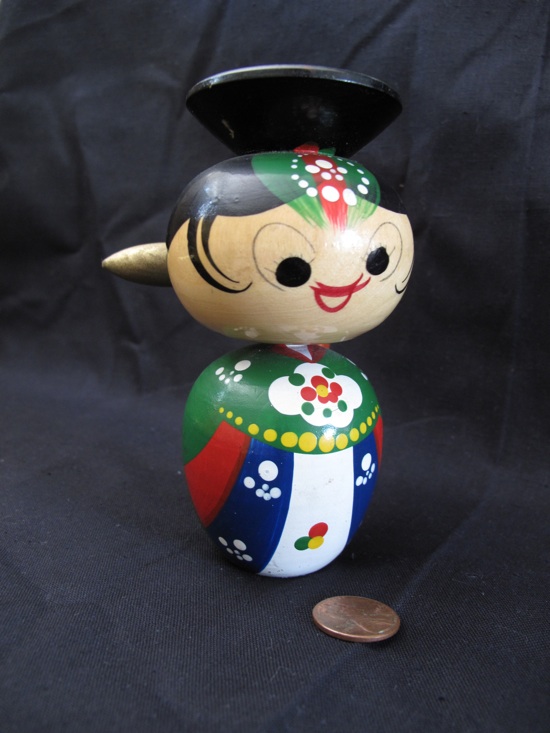 [The auction for this Significant Object, with story by Edward Champion, has ended. Original price: $1.50. Final price: $56.]

The resilient ruffians ran away with the geisha’s canes just after she refused to perform a classless act. While it was true that the geisha dramatized the occasional lowbrow feat, befitting an object of her status, even she had her standards. She’d wobble her elliptical hips within a studded hula hoop forged from painful tungsten alloy. She’d gorge on great sticks of fire while her blind part-time assistant hurled jeweled daggers round her anatomical outline. And if wanton clients had serious dinero — particularly that shiny new oval currency with the Prince Albert piercing — she’d even flash a bit of flesh, relishing her total control over the crowd. The bobbled harpies working the onyx alleys could hike up their skirts for a sou, but she knew every sector on her body was insurable and she remained committed to securing the compensation befitting her curvy carapace. It hadn’t been easy to work her way up from the snowbound steppes without a rep, but she stage-managed her prestige through her divine Venetian valet de chambre.

However, she needed her two canes to get around.

Now wobbling atop a safe surface, the geisha ruminated upon the false proposition with unintended consequences. The three men had imparted intent to pay serious cash, approaching her with necktie paradoxes she decided to disregard. The geisha asked what they would like, shifting her harsh all-business larynx into a soothing dulcet tone. One claimed that his nether enormity was so round and imposing that it confounded the sensors scanning allplace from space.

“Don’t speak like that to a lady!” snapped the trio’s ringleader, who slapped the boor with a mesh metal glove and jabbed him in the anatomical vicinity of recent boasts.

“That’s overstating things,” said the ringleader. “It is exquisitely rude to speak of your insufficient indignities before one of the finest entertainers that this village has to offer. There are subtler ways to elicit a response.”

The ringleader then whispered his lewd request into the geisha’s ear.

“I will not!” shrieked the geisha.

Talks were aborted, but there was a struggle. The self-proclaimed longjohn purloined his trophy.

The final indignity came with the ringleader’s second sordid offer that involved swapping one art for another. But was it so venal? Which line was straighter? The geisha had initially squawked in commerce-laden consonants. Instead of shedding seven veils, she could pilfer from faux furriers and highwaymen expanding their chicanery to a global stage. She reminded herself that she wasn’t getting any younger and that vocations were adaptable. And the new art presented an atonal atonement, an opportunity to correct the scales. Who needed seven notes when there was a human register?

The ruffians returned for their answer. She assented, and the trio gained a fourth member. The run would last longer than any half-baked phantom of the opulent. The new vocation defied objectification and required no crutch.

Edward Champion is a writer in New York.