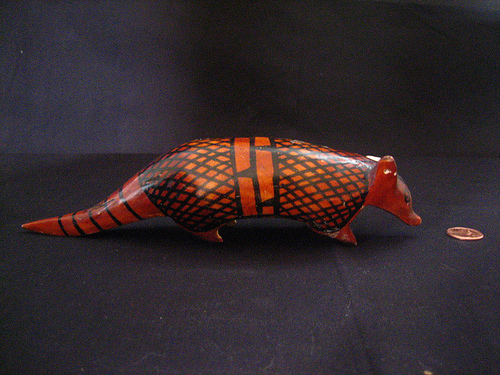 [The auction for this item, with story by Randy Kennedy, has ended. Original price: $1.00. Final price: $16.50. Significant Objects will donate the proceeds of this auction to 826 National.]

Later, in the glove box, the police found a letter. It said:

“Letter To The Police,

All the stuff in the trunk and underneath the sleeping bag on the back seat is stolen (which is embarrassing because it’s just old adding machines and rotary phones and things people don’t use anymore, things I wasn’t going to be able to sell.) But the armadillo on the dashboard is mine. And it would mean a lot to me if you didn’t send it to the evidence room, where things usually end up for good, at least in my experience.

I paid six dollars for it at a monastery gift shop outside of Los Alamos last December after I spent an hour and a half watching a Benedictine brother carve it from a knob of evergreen pine. I was going through a shaky time then and seeing something old-fashioned like that really calmed me down. It gave me the closest thing to a religious feeling I’d had in years.

I’m sure he thought I wanted it because the armadillo is a kind of universal symbol of the West now. But I wanted it because I remembered a strange thing about armadillos, the kind I grew up with, the little black-eyed desert rats. It wasn’t that they jump straight into the air when they’re scared or that they can catch leprosy like humans, but the real evolutionary head-scratcher: that the females gestate four embryos and give birth to quadruplets, always the same sex.

There were four of us boys growing up, not quadruplets but pretty damned close, mom didn’t waste time. We beat each other senseless until we went our separate ways. But I still figured it might mean something to her, now that Jim and Bobby are dead and Pete’s doing whatever he’s doing down in Chile, to have a thing like that from me for Christmas, a nice monk-carved armadillo, a thing I put some thought into.

Hey, so much for good intentions, right? But maybe there’s somebody in the department who has a minute and could drop it into a padded envelope to her, C.O.D. – just Inez McF—-, Sligo, Texas, 79355, the post office knows her, they’ll get it to her. And a note, too, something like, “From Dan, your fat little baby.”

Thanks in advance for any consideration. 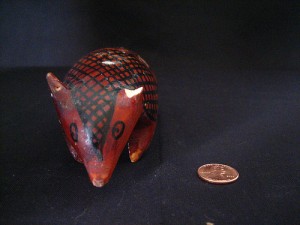 Randy Kennedy writes about the art world for The New York Times and is the author of Subwayland.