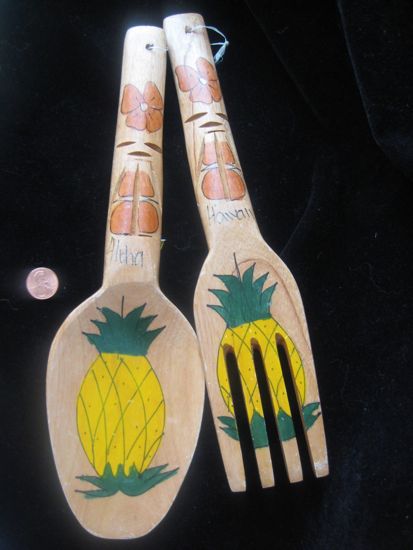 [The auction for this Significant Object, with story by Stephen Elliott, has ended. Original price: $1.99. Final price: $4.24.]

I bought these Hawaiian utensils, a wooden spoon and fork, while living in Alaska in the mid-eighties with my first wife. We were living outside the Eskimo village Wales on the western edge of the state, three miles outside of Tin City Air Force Station. The Air Force station was the location of a long-range radar for air surveillance. It was originally built in the 1950s but Reagan gave it a serious upgrade during his successful bid to destabilize the Russians. From the top of a snowdrift you could see boats pulling into ports larger than many football stadiums, carrying steel arms more than a mile in length.

We didn’t think that was any of our concern, though in retrospect it was the most important thing. It was a cold place and a cold time. The wind would whip off the Bering Straight at more than a 100mph and one day in the middle of winter, counting the wind chill, the anemometer read 160 below zero.

I could say we were there to teach English and Christianity to savages, but that wouldn’t get very far towards the truth. And I don’t have the time, or the bandwidth to get into those stories. We got these utensils from the “village younger,” which is what they call the first son of the “village elder,” believe it or not. How the utensils migrated their way from those warm pacific islands to the furthest outpost of civilization is beyond my knowing. And when the military men showed up in their snowcats and my wife climbed on the back of one of their vehicles, that was beyond my knowing, too. At least then.

I will say, I’ve made great use of these little souvenirs. Good for making salad or stirring hot liquids.

Stephen Elliott is the author of seven books including the true crime memoir The Adderall Diaries.