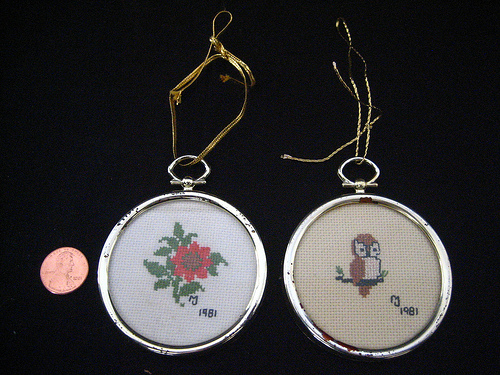 We were married for sixteen years. When Christina was in Girl Scouts, she wanted to earn her sewing badge. I don’t sew: no time, no interest. Why squint, why prick your fingers, when you can pay the dry cleaner five bucks to hem your pants? Paul learned enough to teach Christina to sew on a button. She quit after she sewed that badge on her sash, but he kept going: latch-hook rugs, woven pot-holders, needlepoint pillows, Christmas tree ornaments with little animals or flowers.  If people came over and saw the canvas and embroidery hoops, I would say they were mine. Everyone but my mother pretended to believe it. Mom said, “You know where he goes at night, right? You know what he is?” Sure, I knew. There was a certain bar.  I didn’t think about it too much. Wherever he went at night, he came home to his needlepoint, to Christina. To me.

We got divorced in 1992. “I guess you know I’ve been unhappy,” is what he said. For a while, he’d come and see Christina, Wednesday nights and Saturday mornings. He’d take her to the IHOP. Breakfast for dinner. She loved that. But it only lasted for a while. He moved to Nevada, then Los Angeles, then Seattle.

Three months ago, Christina called me crying. “Daddy’s dead.” In Seattle? I thought. Turns out he’d moved back to Delaware and lived – and died – not ten miles away from where we’d lived together. Christina flew up from Miami, and I drove her to the apartment, in a rectangular concrete building that looked like a high school or a jail. In a liquor-store box were all of her report cards. A newspaper story about a track meet she was in. Her wedding announcement.

I’m angry at him, I guess. Some lady I saw on TV once, some scientist, was saying that it’s not a choice, that it’s in your blood or your DNA, but if he chose to be with me, if he fought it for that long, why couldn’t he keep fighting? Why couldn’t he have stayed with us?

Christina put the funeral on her credit card. “He was my Dad and I loved him,” she said. She’s a good girl to say that, even after she had to see the mess he left behind. And read the autopsy report, which I don’t know why they had to send her. Knowing how it happened doesn’t change anything. Dead is dead. And funerals, I am here to tell you, are expensive.

I don’t know what it means that he had them, that he kept them through all the places that he moved. I like to think that it meant we were connected, that he still thought of us. That in some way, we were still a family – my husband, Christina, and me.

Jennifer Weiner is the author of six novels and one short story collection. She lives in Philadelphia with her family.