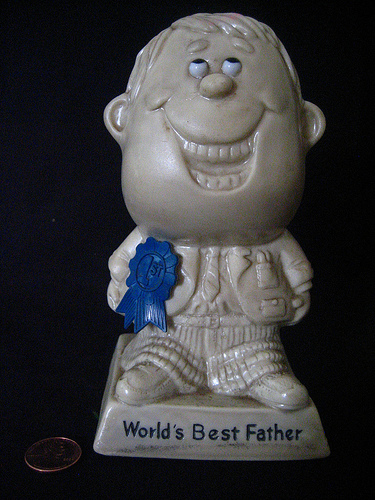 It had been gifted ironically, natch. His friend had spotted it at the mall, and wasn’t it awful? The grotesque smile and bizarre skyward eyeroll. And what was up with those pants? “You’d think someone qualified for this award would be smart enough to buy pants that fit,” his friend said, and they both cracked up. He accepted the statuette with glee, proudly installing it on his shelf in a place of honor between the train whistle sound effects CD and the circa-1971 Zion National Park mug bearing someone else’s name. World’s Best Father. Looking at it, you had to laugh. All those pathetic, Precious Moments-collecting, pewter angel-buying nitwits who actually shopped for gifts at Hallmark Gifts and sincerely treasured this kind of crap. Hilarious.

She hadn’t taken it well when he finally pulled the plug. But what was he supposed to do? It was a big thing, to still not be sure about her after fourteen months. Sure, he’d had his fun over the years. Actresses, college girls, flat-out lunatics. Relationships stamped with obvious expiration dates. With her, it had been about something greater, at least until the doubts started to set in. He knew, in that way you just know things, that it was time. “You can’t be serious,” she snapped. “I mean, literally, you’re incapable of it. You expect to be taken seriously when your place is crammed with junk like this?” She was angrily waving something, a figurine, some gag gift a now-forgotten high school buddy had given him years ago and that he’d never had the heart to throw away. He held it dumbly as she collected the last of her toiletries, admiring again the character’s endearing grin, the appealing splash of color on its lapel. The little man on the pedestal was a doofus, no doubt, but he certainly looked happy, and what was wrong with that?

Something clattered to the floor upstairs and he rose from the kitchen table to investigate, finally abandoning the crossword puzzle at this, the third interruption. From the door of the spare bedroom, he could see his four-year-old leaning against the dresser, trying not to cry. The older one, his son, stood quietly over the fallen object: a small statue, long ago placed on a high shelf, out of sight. He picked it up. The figure, with its bemused eyeroll, seemed to empathize. Kids, right? “Go play somewhere else, guys,” he said. “Mom’ll be home soon and we’ll eat.” They padded out, and he gently scratched the back of his daughter’s neck as she passed him, giving her the chills, eliciting a giggle. He moved to replace the figurine on its perch, then paused, enjoying the weight of it in his palm. The thing was so goofy. Looking at it, you had to laugh.

Jason Reich is a television writer whose credits include The Daily Show with Jon Stewart and VH1's Best Week Ever.