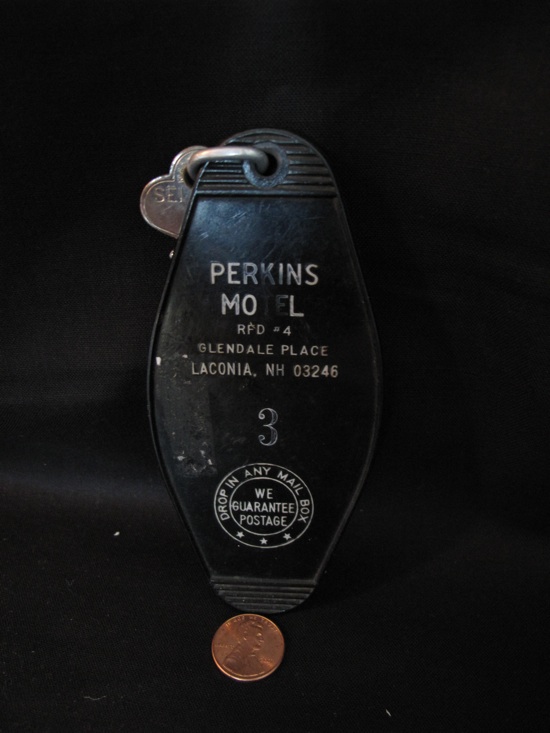 [The auction for this Significant Object, with story by Laura Lippman, has ended. Original price: $2. Final price: $45.01.]

Her husband saved everything. He had a box, for example, of cigarette lighters, useless plugs taken from every car he had ever owned. He saved ticket stubs and playbills. He had three hand-knit sweaters from an elderly aunt, long deceased. The sweaters were scratchy and unattractive; he had never worn them and never would.

So a motel key, here in his cufflink drawer, didn’t necessarily mean anything. Yet she thought it might. And she knew that she that could, and would, make herself crazy about it. Or she could simply ask him. Why not ask him? She hadn’t been spying. She had been putting away his cufflinks, the ones that went with the tuxedo, which he wore more and more often these days, to events where he said she would be bored.

She did. Taxidermy, shower, mother issues. “That was the Bates Motel.”

“Yes, but the actor was Anthony Perkins. Isn’t that cool?”

“And what took you to Laconia, New Hampshire?”

“A road trip with a bunch of guys in our junior year of college.” He held the key, ran his thumb over it. “Drop in any mailbox,” it said, but he hadn’t.

Here it is, she thought. Here’s the moment where you choose to believe, or not to believe. A marriage is a kind of religion, defying rational thought. The idea that someone could love you – the idea that someone could love her – was about as plausible as water into wine, or reincarnation, or seventy-two virgins waiting in heaven. You believed or you didn’t. In or out.

The key is old, she told herself. All the motels have those electronic cards now, even in Laconia, New Hampshire. It holds a memory, and it’s something that occurred years ago, although probably not with a group of guys. Did he lie for her sake or for his own, to keep the story for himself, to enjoy the private thrill of whatever happened in Room 3?

Maybe she should stop putting his things away.

Laura Lippman has published fourteen novels, a serial novella, and a collection of short stories, Hardly Knew Her, which will be released in paperback on Sept. 29 . She lives in Baltimore.