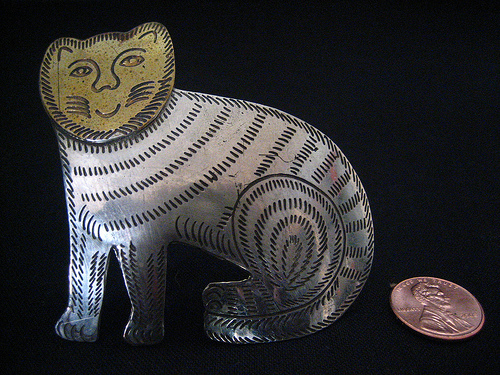 On the bus in the morning, Judith Zinn-Lasser squints to read the small classifieds in The New Yorker, in hopes of finding something really bizarre, like an ad for an island owned by plutocrats where you can hunt St. Bernards. George was a dog person. Is a dog person. He is not dead, he is just gone, and that’s fine and he and Mindy should be happy, because how can you be named “Mindy” and not be? It is a riddle, because the answer is, “you can’t.”

Judith lives with three cats and a foster kitten she will never be able to part with. When she is not at work, she is busy, or she is on the phone, complaining about being busy. She decided to take a wine pairing class. She’s been doing JDate. She’s going to do Zumba at the Y. She is cleaning out the apartment.

Which brings us to the cat napkin ring.

She bought a set of them in a gift shop years ago, when she and George spent a long weekend on Cape May. Is it “in” or “on” a cape? How funny that “Cape” and “Sound” are two words that we teach to children, only to have them mean completely different things when we let geologists have their way with them. The words, not the children.

So, Cape May. Judith was a slip of a thing at the time, and they had the two “boys” back at home, which were not children — they were cats. I say “were,” because now they are dead. But they were great cats; Zenith and Mazel Tov. The Tabby brothers. The gift shop was called Mother May I? and Judith had already bought a thing of candy to bring back to her sister, Ellen, when the napkin rings caught her eye. She decided they were chic and dear.

She wanted to have dinner parties because she and George were newlyweds then, and she relished the adult time they shared before kids, which is another way of saying she wanted — she expected — to have children with him. But they never really had the kind of dinner party you think of when somebody says “dinner party” — all flowing red wine and cowl neck sweaters and clinking grown-ups telling stories about things they think are interesting. The cat napkin rings disappeared over time, swallowed by the quicksand-like detritus in the drawers where they were kept, loose, floating among loose change, keychains, subscription cards, trial-size samples of cream.

I can’t even tell you how many birthday cards Judith dumped into the recycling the other day. She emptied the whole drawer into the bin: twenty-seven years of cards from George: “Jude, happiest [BLANK]-th. I love you.” Every year another cartoon cat. Sandra Boynton’s fuzzy gray fatties with attitudes, bucolic kittens in baskets, “funny” cards that Photoshopped sunglasses and Hawaiian shirts onto chubby orange tabbies. Something about being a party animal? Or over the hill? Now, it’s garbage. There’s only one napkin ring left, and it’s next to go in her Great Purge. It’s nice to have a home with life, with clutter, with warmth. But it’s good to get rid of things. 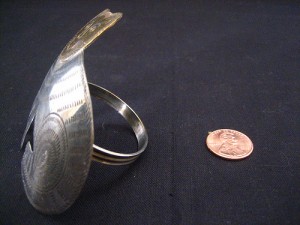 Julie Klausner is a comedy writer and performer whose first book, I Don't Care About Your Band,comes out on Groundhog Day.