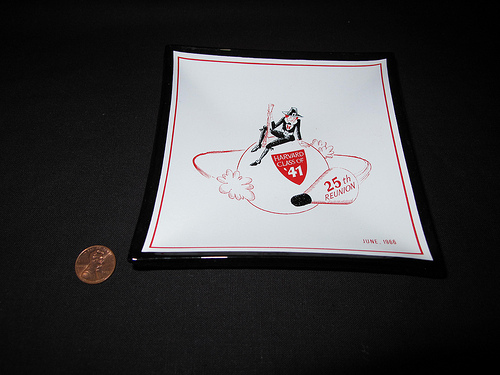 [The auction for this item, with story by Paul Jaskunas, has ended. Original price: $1.49. Final price: $19.50. Significant Objects will donate the proceeds of this auction to 826 National.]

A conversation between a husband and a wife in their room at the Plaza Hotel, in 1966, ends in an agreement to divorce. Outside their door, a maid listens. She hears the man say, Won’t we be lucky ducks when this is over? Won’t we feel like a million bucks then? She hears the woman reply, I hated every minute of Harvard and every minute of you. The man laughs and says, How do I look? The woman answers, How do I look?

They are guests to the ball, Mr. Capote’s ball. Photographers throng the front doors, awaiting the arrival of celebrities — Frank Sinatra, Lauren Bacall — who will appear in black or white masks, tuxedos or gowns. The maid, who is from another country, is unimpressed; she has other things on her mind. She stands at the couple’s door, thinking: in America people are miserable like nowhere else in the world. She would like to glimpse the man and woman in their elegant clothes. She lingers, dusting a table she has already dusted, but they don’t appear.

Hours later, the ball begins. The husband and wife look lovely. They dine well and converse with writers and actors, a singer and an heiress. From a distance, they consider McGeorge Bundy’s hairline, the cut of his tux and troop levels in Vietnam. They drink heavily to celebrate their impending divorce and waltz and decide, midstride, to move to Europe, start again, with other people, in other languages.

Sometime after midnight the maid’s son lands in Saigon wearing fatigues, a helmet and the mother’s cross. The ballroom echoes with the talk of stars as the maid arranges bon bons on plates in the kitchen, wondering what a million bucks looks like when it dances in the Plaza.

In the morning she cleans rooms as usual. She finds in the departed couple’s suite a white plate from Harvard and at once knows she will take it. The pilgrim figure straddling the globe is a symbol of something. It makes the earth look small and history look friendly. The maid is a woman of faith, a seeker of icons. She sets the plate on a stand in her apartment in Queens, imagining that its one-time proximity to power will rub off. Yes, power is what she wants, what she asks God for when she prays or struggles to read reports about the war. Power is what every American needs, what you cannot do without, and somehow the plate assures her that power is near at hand.

The story ends well. The son comes home alive and uninjured. The maid is no longer a maid. She becomes a teacher, beloved by former students all over the country. As she grows old and wise, she saves the plate in a drawer, along with the American flag they give her when she became a citizen. Whenever she sees the plate, it reminds her of the Party of the Century and how it felt to be weak.

Paul Jaskunas is the author of the novel Hidden and a recipient of the Friends of American Writers Award. He teaches writing and literature at the Maryland Institute College of Art.