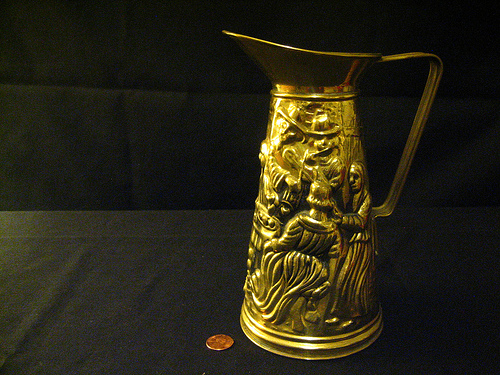 [This is the first installment in a four-part story by the members of Kasper Hauser. The auction for this object, with story by John Reichmuth, has ended. Original price: $3.00. Final price: $15.50. Significant Objects will donate the proceeds of this auction to Girls Write Now.]

A violiner, a fifer, some apples, a small girl holding a bunny by its fore-ears. These were the images depicted on my dad Dale’s mung pitcher. When I was 13 and learning how to use this the East Coast Way, as an inconvenience preferred because of its gravitas, like a fine old two-edged razor or a whale-hide jumping rope, Dad, the traitor, with a cigarette in his moist mouth, bailed out the cocoa in the toilet and sprayed grandiosely: “The Carpys practically invented mung bailers.”

This one depicts the first Halloween, but when I used it to bail mung at Wesleyan, in Vietnam, in Phoenix, and now on my deathbed in Miami, my start-a-zoo plan in the dump, I would imagine I saw Abe Lincoln, a state trooper, Mother Teresa, even a hippie girl, anything, anything to get my mind off the revolting stench of the mung.

Last week Gene Lightfoot, the guide, and I brought this pitcher in the swamp-boat for luck or to piss in. Now there’s a scuff on the top of where I tried to fend off the alligator that really ripped my foot off. 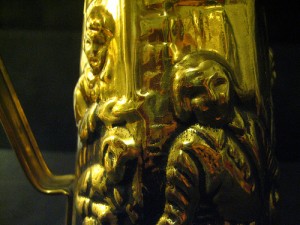 John Reichmuth is a practicing attorney and a member of the comedy group Kasper Hauser, authors of SkyMaul, Weddings of the Times, and Obama's Blackberry.

One thought on ““Brass” Pitcher, part 4”