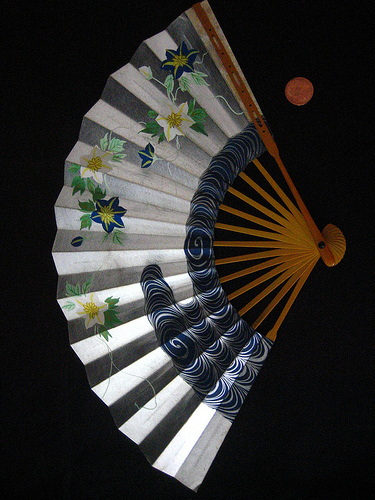 [The auction for this object, with story by Lakin Khan, has ended. Original price: $1.00. Final price: $21.50. Significant Objects will donate the proceeds of this auction to Girls Write Now. ]

The cardboard sign, neatly hand-lettered in black, was propped in the front window of the crowded little shop: “Fans For Sale.” I imagined an army of mercenary fanatics willing to cheer for, blog about whoever paid their wages. I sure needed some ego-boosting fans: here I was, 29 years old, five years out of grad school, two years out of a bad boyfriend, a flunky for Closets-R-Us L.A.

A crowded shop, not much larger than some of the his&her walk-in closets I laid out for people who had actual, bona-fide fans. Midday light dimmed by high fog barely made it inside; the door shut behind me with a sharp jangle from outsized bells on a red strap, just audible over the susurration of many switched-on fans.

Fans of every conceivable shape and size lined shelves racked along all three walls. Large, square window fans. Short, round stand-alone fans with blades protected by a bubble of chromed grillwork. Slowly whirling ceiling fans, with down-turned lights that were the only indoor illumination. Fans to mount on a car dash, small desk fans with clamps, portable battery-run fans, fans attached to the bill of a cap. Slick oscillating affairs on stands and stools were herded into the middle of the floor. Air currents tugged this way and that, ruffling the sleeves and hems of my linen jacket.

From the repair shop in back, a thin, stooped man angled himself through the dull gray accordion-fold door that was permanently left either half-open or half-closed, depending on how you looked at it. He stood behind a long glass display case that also served as the counter, pushed his graying ponytail behind his shoulder with one hand, gesturing a soundless hello with a wave of the other and two raised eyebrows.

And there, opened in semi-circles and layered on the red velvet shelves of the case in front of that half-open, half-closed door, were the handheld fans, the ones made of paper or foil or embroidered cloth. Some were elaborately painted with scenes of the French court or lush flowers or exotic birds; some were inset with lace, ivory, ebony. Others were of a more austere design created from rare woods and handmade paper. So many worlds; so many choices. The man took them out one by one, handled them gently, opened them, closed them, fanned them, stirring the air in front of my face.

The one I bought is small, but it was all I could afford. It’s small but exquisite, with cherrywood splines, hand-painted on silvered paper — a dark blue ocean swirling up from one side and bottom, an opposing wave of green vines and flowers flowing down from the other side and top. I loved to open it, close it, leave it perched on my desk in the halfway position, reminding myself that, at any point, you can choose to see your life either way. Closing down or opening up.

Beginning Summer 2010, Lakin Khan will be the Fiction Director for the Napa Valley Writers Conference. Her fiction, essays, and poems have been published in zaum, Newsbytes, 6S V2, and Tiny Lights, A Journal of Personal Essay. She blogs at Rhymes With Bacon.