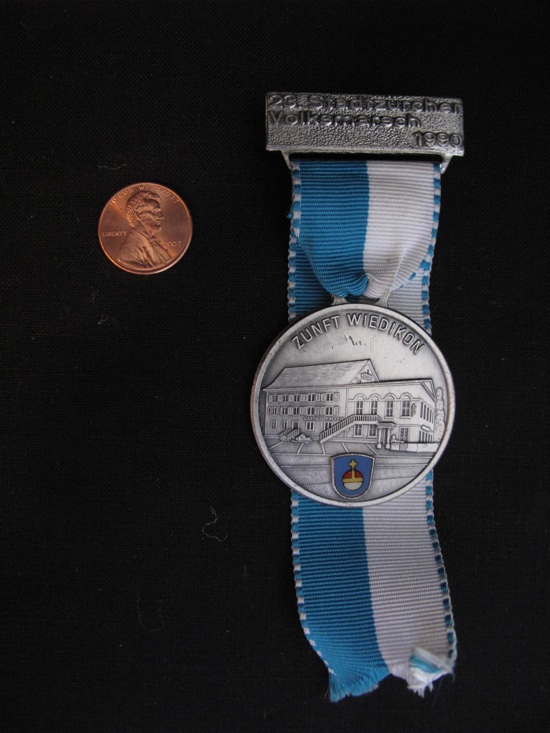 [The auction for this Significant Object, with story by Kathryn Borel Jr., has ended. Original price: 50 cents. Final price: $16.]

Marc’s room smelled like half-open tins of chewing tobacco. He liked Skoal butternut, and I loved it too. Not to chew — I was only seven — but I loved the way its manky smell would tussle and fuse with all his other teen things: his gym bag with its tube socks and olive work shirt, the after-effects of a spritz from his Polo cologne. I’d sneak in there before he got home from Ramapo High, before he’d lay out all his textbooks with concepts inside that were so out of reach to my little mind they thrilled me to the point of terror. Everything about him was intoxicating — his creepy Grateful Dead posters of skeletons with roses for eyes, his silver record player with a thin film of dust between the buttons, the black woolen winter hat decorated with all the lapel pins he’d been collecting since he was younger than me.

One night I’d dared open his door, knowing full well that he was in there. My mother had warned me to leave him alone — Lovey was over. Lovey was his girlfriend, I think. It confused me, because my parents called us all “lovey.” So I turned that knob and let the door fade off to the left. There they were, Marc and Lovey, rolling back and forth on his single bed, their shirts hiked up to their necks. I stood there staring, distracted by the pin hat. It sat upright, stuffed with balled-up newspapers, on a stack of his Ramapo yearbooks. In the middle of the hat was a thin rectangular pin with a ribbon and medal hanging off it, all gorgeous and cyan and silver. My father had given it to Marc after very long business trip to Europe. I’d received nothing but a crummy pile of rocks he’d pick-axed off the Berlin Wall. Eventually, Marc noticed me in the doorway, leaped off the bed, punched me hard on my shoulder and slammed the door.

Marc got the medal because he was the oldest and my father loved him best. When I asked him if we could trade, he said, “Shut up, twerp.” Then he knocked me down and dragged me across the living room carpet for 10 solid minutes until my back was sore and red. I’d laughed all the while, trying to act tough. But late that night, my mother had to soak a bunch of rags in cold water and lay them on the raw spots to take away the pain.

When he left for college, I stole the medal from the pin hat. It was lying right on top of one of the moving boxes. I’d never touched it before, and it was far heavier than I thought it would be. I hid it inside the cavity of my sock puppet, Gaston.

During frosh week initiation, my parents received a call. Marc had been running barefoot through the quad and had stepped on a rusty nail. He had tetanus. For six weeks, he lay in the hospital. We packed into the car to go visit him. Before leaving the house, I looked hard at Gaston, who was sitting in his place in the middle of my bookshelf. For a flash of a moment, I considered giving back the medal.

Kathryn Borel Jr. is a writer and broadcaster in Toronto. Her first book, Corked, has just been published in Canada. It comes out in the U.S. in February.