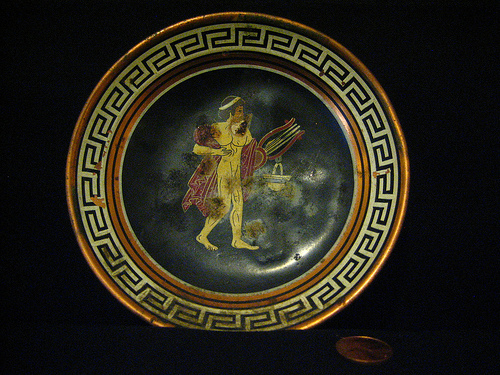 [The bidding on this object, with story by Kathryn Kuitenbrouwer, has ended. Original price: 69 cents. Final price: $30. Proceeds from this auction go to Girls Write Now.]

The dogs waited outside whenever Hilary came. Well, at first, there was just the one dog and then as time passed, it spawned, as if with my desire.

I opened the door but there were so many strays jostling, I couldn’t see her at first. Then, she wolf-whistled, and shrilled, “Laikas, sit!” They all lowered, panting, some cocking their heads, some not. Seventeen mongrels, I counted.

I knew they’d give her (maybe) an hour, and then she’d be laughing at me for my fabulous attempts to keep her there.

“I don’t know why you tolerate them,” I said. We were in the sofa, by then, the Greek ashtray nestled into the concave of my belly. “If they turn on you, then what?” Hilary had scars where she’d been bitten and an oozing wound that she wouldn’t let me tend.

The dogs were practically feral.

“I don’t tolerate them,” she said. She leaned over and twisted her cigarette softly on Orpheus’s leg, watched his skin peel off.  “I have no idea about them, at all,” she said. “They like me. They lick and nip. It’s play that goes too far.”

I could hear the dogs whimpering, beckoning.

I flexed my pectoral muscles tight and tried to look naturally hot. I draped the red velvet curtain across myself and pouted elegantly, desperately. I proffered more Cuban cigarettes. I exhaled earthen smoke into her ears, her mouth, whatever opening I felt like.

When I went too far, she giggled and pushed my face away from down there with her bare legs. “In the old stories,” she said, “there is always a door through which the hero must never pass.”

She drew on the Cohiba so deeply it almost disappeared. “It’s a portal to this unimaginable place.”

The dogs were scrabbling, yipping at the porch screen. A howling set up in response to a siren off in the Annex. I grabbed her ankle; I had noticed a long scratch, like on torn nylons, only raw, fresh skin.

“It’s something stupid I did,” she said, holding the ashtray in one hand now. I didn’t dare ask what stupid thing she might have done. I just watched her cigarette wantonly remove his face, char his cloak, and burn his private bits. The dogs began jumping onto the windowsill, drooling on, and worrying the glass pane.

I was frantic for her. I placed a small piece of dark chocolate on my penis. “I know this trick!” I flicked my abdominals and caught the arcing chocolate between my teeth.

But she was already dressed. She laughed to placate me. “Nice,” she said. “Brilliant.”

I stood in the threshold when she left. The dogs were whirling outside, anticipating her. They nibbled each other’s ears, moaned, and showed their gums in undeniable grins. And I counted them as they followed her receding sway. Twenty-nine.

Kathryn Kuitenbrouwer is the author of the novels Perfecting and The Nettle Spinner and the story collection Way Up. She teaches creative writing at The University of Toronto School of Continuing Studies and online through The New York Times Knowledge Network. She is the former magazine editor for Bookninja.com. She lives in Toronto.