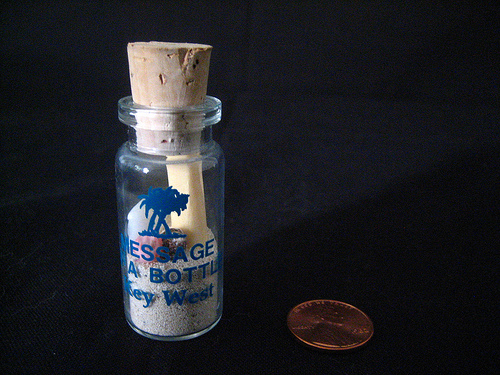 [The auction for this Significant Object, with story by Wesley Stace, has ended. Original price: 33 cents. Final price: $52. This is the first of three stories in our Identical Objects series. Proceeds from this auction go to Girls Write Now.]

We were the unluckiest band in the world.

On reflection, and it’s all I’ve got left, Key West was not a great name. I was thinking Ernest Hemingway and Tennessee Williams, Doug was thinking “Songs In The Key of the West” and all that, but that was right when “Margaritaville” went global, and it was too late to change. We were an edgy post-punk combo, reading the right books, listening to the left bands, and suddenly people were asking if our music was “Gulf and Western” and I didn’t even know what it was.

The first single was “Message In A Bottle”. I know, I know. It seems mad now, but at the time I honestly didn’t think it mattered. Besides, there was a lot Sting left unsaid. He only skimmed the surface. The worst is when you get booed for playing your new single because the audience discovers it isn’t a cover of a Police song.

I said to Angie from the record company: “Sure you can make a tchotchke, but please avoid the obvious.” She laughed at how dumb that would be. Mind you, she was also the one who told me with great enthusiasm that our new record was a “Tour de France” and I asked her whether she meant “Tour de Force” and she said she didn’t know.

Anyway, you can imagine my surprise when I open the sample at our management office.

“Butch,” I said, “it’s everything we didn’t want. Our vibe isn’t Key West and our logo isn’t palm trees.”

“I couldn’t put a hammer and symbol wrapped in barbed wire on this.”

I let it go. “Barthes would have a field day.”

“Besides,” he enthused, “the mini-scroll inside has the lyrics on it.”

“Oh well, that’s something,” I said, ever the peacemaker.

“Unfortunately, it’s the wrong version. There was some miscommunication.”

“We have to throw them all away.”

When Kanye West turned up to freestyle  on that wretched song with The Police at Live Earth in 2007, I couldn’t believe my luck. I went to the trouble of getting little stickers made which transformed Key into Kanye, but even I wasn’t convinced. He butchered the song anyway. Sally said you shouldn’t throw good money after bad.

Weirdly, due to a glitch at Harry Fox or PRS or somewhere, I am currently receiving royalties from some version of Sting’s song that has mistakenly attached itself to my name and account. It’s difficult to be honest about this, however, because it’s now my main source of income.

Sally said the tchotchkes were a monkey on my back and that we should get rid of them while waving around some sage. Dumping them into the sea was not her greatest idea however. Almost anytime I go to a beach, I find one of them bobbing in the surf at my feet.