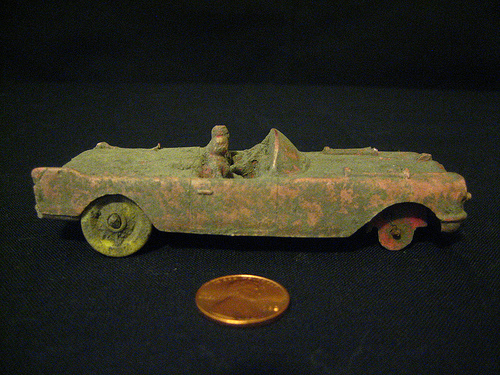 [The auction for this object, with story by Marisa Silver, has ended. Original price: free. Final price: $41.00. Significant Objects will donate the proceeds from this auction to Girls Write Now.]

I failed my learner’s permit test three times. The first time, my father was angry, because he had gotten out of bed at seven thirty on a Saturday morning so we could be first in line when the DMV opened at eight. Still, we had to wait three hours. “The world is not as simple as you make it out to be,” he said, shifting in the uncomfortable plastic bucket seat, his fingers itchy for a newspaper or a coffee. “It’s not just, ‘you make a choice and stick to it.’” His words ran through my head while I took the test, and when my time was up, there were some answers I wanted to go back and change, but I didn’t. When I failed, I knew he had been right.

The second time I failed the test, my mother said, “You think you can pull the wool over everyone’s eyes, but you can’t. I know what you are.” We were in the living room and my little brother, Neil, looked up from the floor where he was rolling his toy cars back and forth on the light green carpet, making ruts that my mother complained about. Sometimes, when my parents were fighting, Neil would make his car noises loudly so that they would start yelling at him. His face relaxed while they berated him, like he was relieved.

“Words have meaning,” my mother said, hotly, when I walked out of the test room the third time. I’d stopped trying to figure out what my parents were talking about most of the time, but something about what she said struck me as wrong because the more I studied, the less obvious the questions seemed to me. For instance: To avoid last-minute moves, you should be looking down the road to where your vehicle will be in about a) 5 to 10 seconds; b) 10 to 15 seconds; c) 15 to 20 seconds. Suddenly it made no sense that distance could be measured in time, or that you could avoid a future that was going to happen to you in only 20 seconds. Even though I had studied that question and knew the answer, I could not mark the right box with my stubby golf pencil because I was sure that the answer the DMV wanted was wrong.

The fourth time I went to take the test, my brother gave me one of his toy cars for good luck. My dad had bought him the car, telling him it was the same model as the first car he’d ever owned. The car was pink and my brother had tried to paint it over, but he didn’t have the right kind of paint so the car ended up looking like a school bathroom. I put the car in my pocket, turned off my brain, and took the test. I passed. I made no mistakes at all. By this time my parents had split up and my aunt was waiting for me in the waiting area because my mother had started back at her old job selling perfume at the department store. I kept my brother’s car all these years, even though the wheels have broken off and gotten lost, and it is so derelict even my own kids won’t play with it. It reminds me that even if you look down the road to catch a glimpse of your future, there’s not much you can avoid. 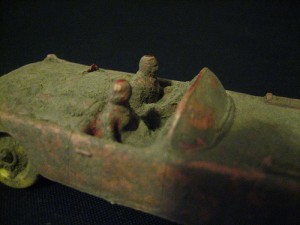 Marisa Silver is the author of four works of fiction including the novel The God of War and the story collection Alone With You, which will be published in April.