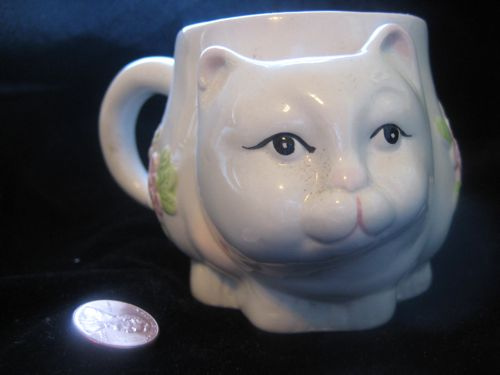 [The auction for this Significant Object, with story by Thomas McNeely, has ended. Original price: $1. Final price: $17.]

As a mug, it was useless: pot-bellied, so whatever we drank, herbal tea, cheap whiskey, cheap red wine, dribbled down our chins, as if we were children; the pouch behind the cat’s head, a promise of tidy convenience, worse than useless, good only for planting cigarettes like flags after we’d given up on it as a mug.  Its only redeeming aesthetic feature, the patina of mold we were never able to wash from the right side of its nose, at least offset its louche, ridiculous, wall-eyed gaze.

We found it on the back porch, a screened-in box tacked to our apartment atop a treacherous flight of stairs. Down the street, at one end, the last bus stop to the university between two liquor stores, at the other end, a park that looked dark even at midday, always deserted. We took boxes of junk by bus from our dorm, the tail end of our freshman year in college, both of us barely nineteen years old.

The day we found it: Late afternoon, early evening, scraps of cloud like red satin blankets, surcease of summer heat. We lugged plastic milk crates from the bus stop up the vacant street, past the liquor stores, trying not to talk about what your mother had said, that you were on your own.

As I put the key in the lock, my hand shook, thinking how flimsy it was, how easily it could be broken. It was our first time there without the landlord, a tidy, soft-spoken man whose sex life we speculated upon; everyone was a character to us, then.  I thought I should carry you across the threshold; maybe we did this, ironically; maybe I’m only imagining it.

I remember how our footsteps echoed, how doors creaked across bare wooden floors.  We roamed the house tentatively, as if it wasn’t really ours.  In the kitchen, you jimmied open the back door, which I’d forgotten, a surprise, a secret passage.

Outside, the wall of maples above the creek you had yet to discover had already darkened to shadows.  I started to speak, to warn you not to step through the hole in the porch; but you’d already turned, holding the cat mug like a prize, plucked from a cobwebbed corner, straddling the gap in the floor.

We washed it as best we could in the coughing sink. Tiny spiders erupted, scattered ahead of the rushing water.  We put it on a windowsill, saying we would clean it later, when we had soap.

On a curio shelf, we found a roach the landlord had left, and smoked it, and made love quickly, clumsily, on a sleeping bag on the bare wooden floor.  Sometime that night, I woke to the platting of distant gunshots outside.  I lay on the narrow strip of fabric, holding you, imagining our empty apartment, the cat on its windowsill watching us, the vast, encompassing night sky above.

May, 1987, Austin, Texas, two bedrooms, half a house, $225 a month; signs and wonders were everywhere, then: runes, tarot cards, the harmonic convergence, though we didn’t believe in any of that.

I wanted to call you, to tell you I’d found the cat, unpacking boxes in another house.  But it was late, and I didn’t know if you would answer. 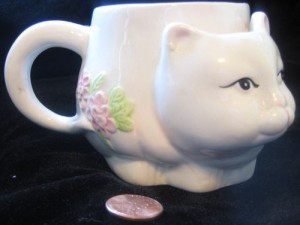 Thomas McNeely, a recent NEA and Wallace Stegner fellow, is completing a novel, The Secret World.