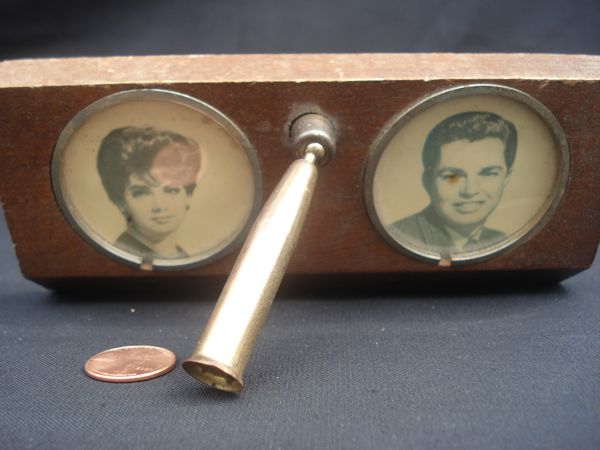 [The auction for this Significant Object, with story by Lizzie Skurnick, has closed. Original price: $1. Final price: $11.50.]

When I was four I thought it was a periscope, or what I thought at the time was called a periscope. My father in fact owned a number of such items — tooth-stained daguerrotypes, box cameras with their fussy, pleated collars, 3-D twinned images propped on a lorgnette that drew into focus as you set it on the bridge of your nose. This last was of Paris, or what I thought at the time was Paris. It may have been Versailles. In the wavy back and forth a river masses in front of a low building stretched through the entire frame. Each window winnows back as well; I don’t know how they did that. My parents’ spare room was a jumble of such items: company pens, campaign buttons, tax statements, plastic nameplates from companies that haven’t exist in a quarter of a decade. I think such things become valuable over time. When I was five I found a black pen abandoned from another desk pen stand and spent significant time attempting to fit it into this one holder. It was a fat pen, dulled on its golden tip, and it was a constant frustration that it would not descend, that the modern ballpoint rattled loosely, a spoon on the side of a coffee cup.

When I look at it now of course I remember these faces, though I haven’t seen them for years. If I sat with the jumble of my father’s vintage photographs in my lap, flipping through, I might remember them as well. Perhaps I would merely think I was remembering. How quickly one becomes familiar, how the present slides into focus set against the past, propped to the bridge of your nose. And which building was that? Maybe it was a park. I see the dust remains its gummy, unliftable film. I would flip it on its back, hold the cold wood to my forehead, trying to see backwards through to them wherever they were, their strange eyes to my strange eyes.

Lizzie Skurnick's memoir of great teen classics, Shelf Discovery, is out from Avon in July.