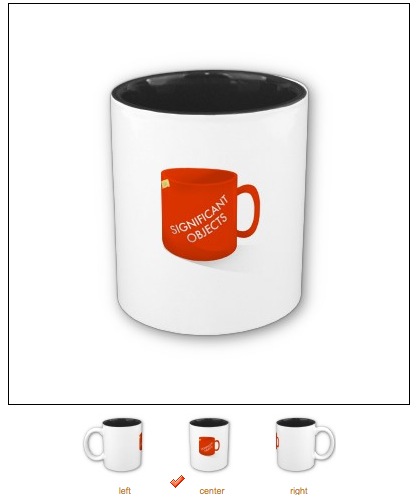 We better not find one of these in a thrift store any time soon.

In response to email and queries in this site’s comments about buying a Significant Objects Mug (i.e., because of our project’s mug logo, which Joe Alterio whipped up for us in a hurry when we suddenly decided to retire our original logo, a Salvation Army shield parody), we did a little research and found that manufacturing an actual red mug takes a bit more savvy than we now possess. We’re looking into that and welcome your tips.

Meanwhile, we’ve devised something every bit as pleasing: The Significant Objects Mug Mug.

That’s right, we’re now selling a handsome mug upon which is featured a depiction of our own, even more handsome mug logo. Why is the mug logo Alterio created so perfect for our enterprise, you ask? To answer that is to explain the secret origin of Significant Objects! Read on. 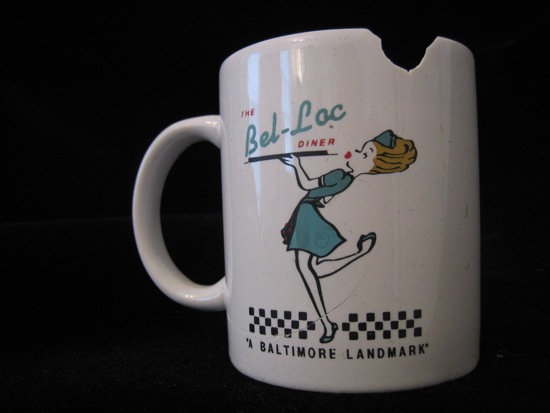 As I’ve mentioned in a few interviews, a mug was partially responsible for inspiring this entire project. Specifically, the mug above. I bought it years ago on a trip to Baltimore with my now-wife; and in 2005, I broke it. Obviously this mug had no particular marketplace value at the time I accidentally smashed it — yet I was quite stricken. To me it was irreplaceable, precisely because there was a nice story to it. (I’ll spare you.) And that got me thinking. . . (Why did I photograph the mug? I knew that some day I’d cross paths with Joshua Glenn and we’d create Significant Objects! But I threw the actual object away. C’mon, it was just a busted mug.) 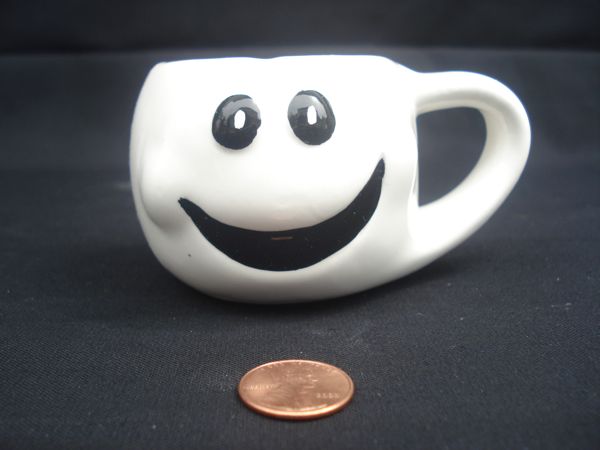 When Significant Objects launched this past July, a flurry of bloggers writing about the project picked the early S.O. shown above to illustrate their stories and posts — a Smiling Mug, bought by Josh, and given Significance by Ben Greenman. Josh has already written a bit about this mug in an analytical post on Significant Dishware. 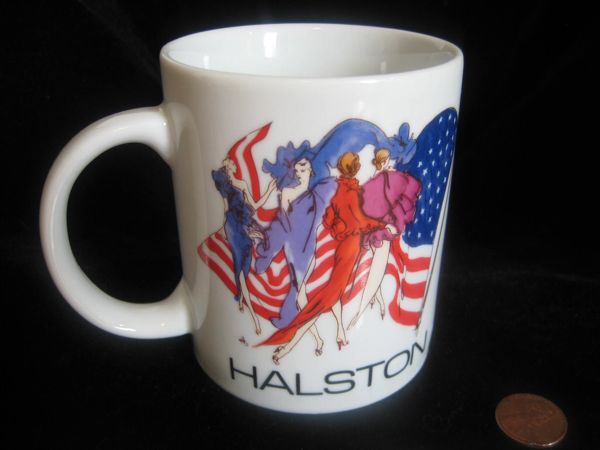 The Halston Mug, which I purchased my first shopping excursion for the project, and which was given Significance by Mimi Lipson, was another important early object. A critique that a couple of humorless observers made about Significant Objects in the beginning was that we weren’t really being scientific. For instance, to demonstrate truly that our stories were making our objects more valuable, some contended, there should be a direct control group: the identical object, sold sans-Signifcance, at the same time. To these nitpickers, I say: see below. 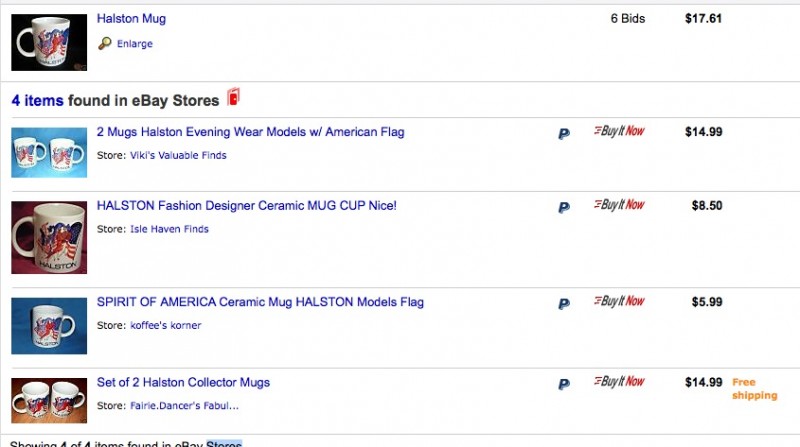 The Mimi Lipson-Significant Halston Mug sold for $31. This screen grab, made while the auction was still ongoing (and the Significant Halston Mug bidding was at $17.61) demonstrates that anybody who wanted an identical mug could “Buy It Now” for as little as $5.99. Why not do that? Because every other Halston Mug on offer was insignificant. Sure, you could buy one of the other mugs if you were only interested in getting your money’s worth. (Although frankly those eBay sellers are dreaming; I bought the S.O. Halston Mug for 39 cents.) But our mug was a mass-produced object converted (by Mimi’s story) into a one-of-a-kind Significant object. I rest my case. 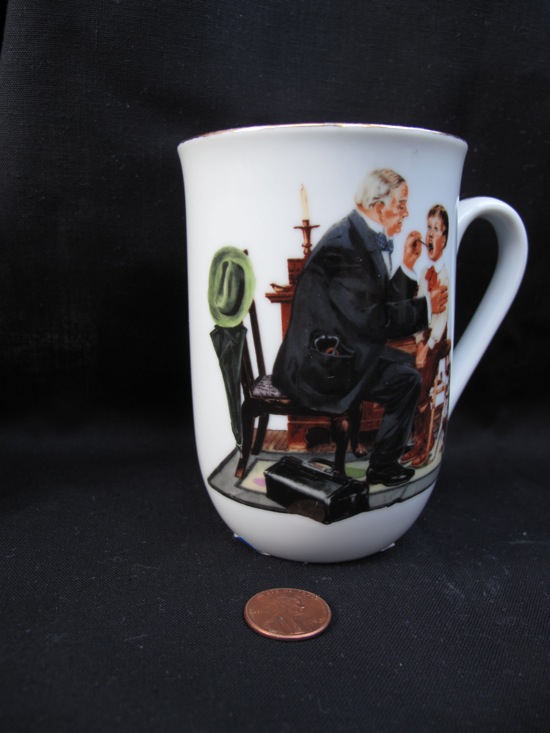 There have been other mugs in S.O. history, and there will be more to come. But the Country Doctor Mug pictured both above and below, which featured a design “inspired by the art of Norman Rockwell,” is now one of the project’s memorable Insignificant (or Lost) Objects. “I grew to loathe the mug,” Josh recalls in the Significant Dishware post, “and finally I hurled it into the garbage.” I vividly remember Josh informing me that he had banished this object to the realm of definitive non-significance. I was stunned! I’ll admit that I had been fascinated by the lame “explanation” on the back. 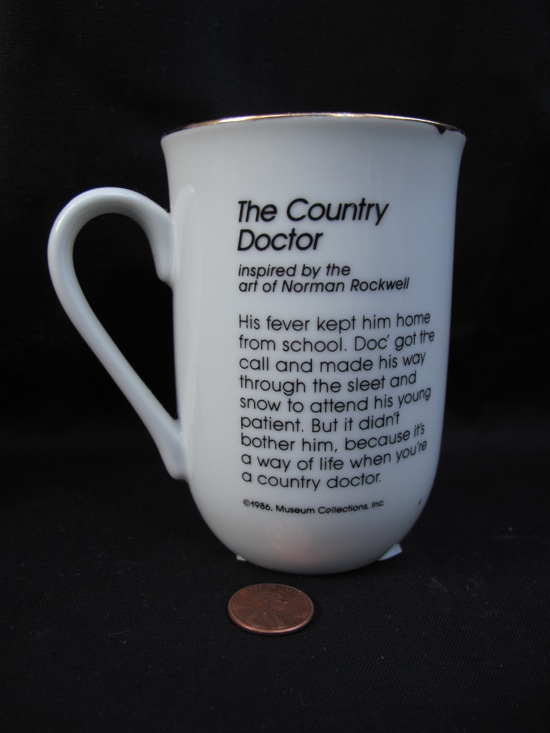 “You threw it away?” I asked, incredulous that Josh didn’t consider such a powerful manifestation of, well, bullshit, worth hanging onto.  “You’re right,” he replied. “I should have smashed it.”

He really hated that mug.

What will we do with the “royalties” from the Significant Objects Mug Mug? Since we’ve already purchased several SOMMs ourselves, we’re at least hoping that future sales will help defray our own costs.