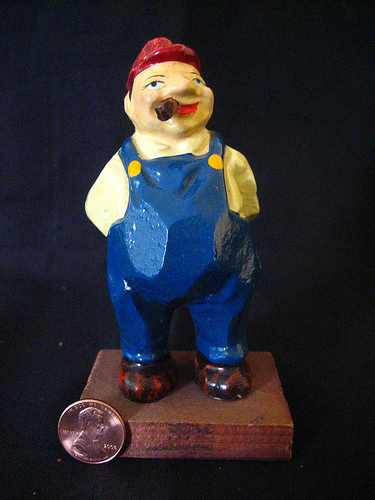 This little smoking man did not appear in Inglourious Basterds. But he came close.

Back in 2007, during  development, Quentin Tarantino was visiting the Santa Monica bungalow of Kimberly Van de Hoeven. She had art directed an update of Amazon Jail and several other movies Tarantino admired; he wanted to feel out the possibility of her working on his World War II movie.

As Van de Hoeven recalled, they were sitting in her sun-flooded living room, making small talk about how Zodiac could have been a great movie, had it not been so slavishly devoted to ’70s period detail. When Tarantino noticed the figurine on the mantle, he jumped up from the sectional couch.

What in the hell was this? Tarantino grinned. He turned it over in his hands. The Smoking Man reminded him of his Uncle Gino, he said, down to the walleyes and stogie: a sheet metal union man all of his life. Examining it, Tarantino grew excited. He began waving the little man around.

See, this is what he was talking about. This Little Guy, he could be from the 1940s or the 1870s — it didn’t matter. He read as homey, that was the important thing, as one of those weird personal objects people had put in their parlors since I Love Lucy or before. This was where Zodiac had gotten it wrong, with its too devoted attention to scuzzed-out ’70s pirate FM radio.

With this Little Guy you could telegraph family, hearth, menace — all in one shot. How cool was that? Tarantino’s face had reddened alarmingly. Very, said Kimberly. She tugged at her yoga tank top and tried to smile.

There was a scene in the upcoming project, Tarantino continued. By now he was pacing. A Nazi officer interviewed a French Farmer who was hiding Jews. They would sit at a kitchen table.

Imagine Mister Smokes here, lurking in the background. We put him in a nook, we put him on the counter, right? As the officer asks questions the camera pans over the uniformed shoulder, past the farmer’s cowlick, up and into this sweet little manatee face, until it fills the screen. Tension, with a capital ‘T.’

Whatdayathink? Tarantino grinned. He looked proud as a schoolboy. That’s why you’re going to let me have him, right?

Kimberly threw back her head laughing. At that moment she thought: 1. Wow, he really acts like a Director and  2. This belonged to my grandfather, who escaped the camps at Blesdijke. No frigging way I can give it to him.

Van de Hoeven stuttered an apology, told him it was a family… thing. Tarantino reassured her it was cool. They finished their smoothies, shook hands. Quentin said he said he would be in touch. Two weeks later he called: they had brought someone else on board. But QT said he had a re-make of Viva Zapata! in mind, and that she was at the top of his list.

Vicente Lozano is a writer who lives and works in Austin, Texas.