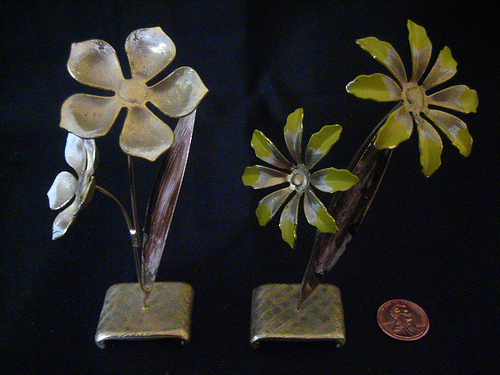 [The auction for this Significant Object, with story by Justin Taylor, has ended. Original price: $1.49. Final price: $81. This is part two of a five-story teamup with the literary magazine The Believer. Proceeds from this auction go to Girls Write Now.]

So I bought the metal flowers as a present for Felice, not for any particular reason or occasion — the lack of occasion being itself the point. There were two of them, each with a base of about a square inch and two distinct blossoms. The petals on one of them — the one which, unaccountably, I kept thinking of as the right-hand one — had their tips painted green. Anyway, I ended up not even having the chance to show them to her (obviously, given what happened) and so there I was at the far end of a subway car, sulking and digging around in my bag for my headphones so I could drown out the woman at the other end of the car who was singing, presumably for donations, though she wasn’t standing in the aisle, but sitting down, so maybe she was just a passenger — and nuts. The song had no chorus, refrain, or even verses, really; it was more like she was just singing the thoughts off the top of her head. And all she ever thought about, apparently, was how good God was to the wretched of the earth. “And the glory,” she sang. “And the glory and the glory and the — oh yes, it sure is.” She drew a breath and held it for a beat, then unleashed: “Glory yes, Lord, oh you know it —” and so it went. I finally found the headphones but the cord was tangled up in the flowers (well, just the one of them, the unpainted or “left-hand” one). The cord, white and wrapped around the flowers-stem like a vine, looked like some dangerous invasive species. I set to work disengaging the flowers from the cord, and as I achieved this feat the train happened to pass out of the ground and up onto elevated tracks, washing the whole car in briefly blinding light. Surprised, I let go of the flowers, which, free of the cord now, fell to the car-floor but did not slide away. They landed upright on their little base and, ridiculously, held their position. Metal flowers growing out of the ground of a subway car floor. It made sense. I plucked my flowers back up and inspected them. Then I was on my feet. What exactly was I doing? I had no idea. I re-bagged my headphones, got the other set of flowers out, shouldered the bag itself, and walked down the length of the car and stood before the singer. I handed the unpainted flowers to her, a gesture I hoped meant great show, kudos, cheers. She took them from me as if they were utterly expected, and perhaps they were. She stood up and I had to step back, fast, to get out of her way. She put the big blossom up close to her lips, and, taking the flowers for a microphone, began her encore. I stood beside her and we sang. 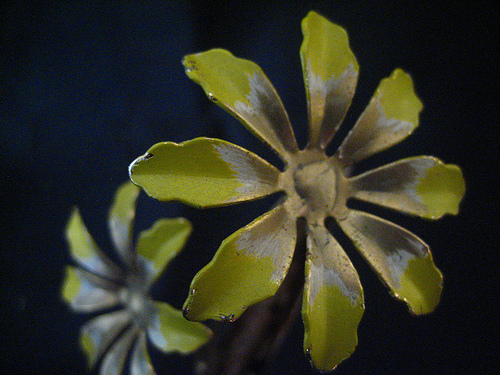 Justin Taylor is the author of the story collection Everything Here is the Best Thing Ever. He co-edits the Agriculture Reader, an arts annual, and blogs for HTMLGiant.com, a blog. His website is justindtaylor.net .