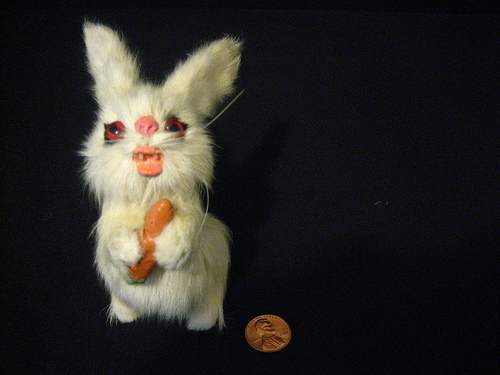 [The auction for this object, with story by Stephen O’Connor, has ended. Original price: free. Final price: $24.50. Significant Objects will donate the proceeds from this auction to Girls Write Now.]

Nobody could remember back before everything was Astroland, but some people pretended. Hop-a-Long was one—so-called because of his gigantic tinsel-furred ears, his rabbit-eye-red eyes, but not because he hopped. He didn’t hop. He rocked from foot to foot as he walked, like a chair coming down the hall by itself. “Back then everything was real,” he said. “It was boring. Fishtails weren’t worked by levers and springs. A world without a sense of humor.” Hop-a-Long the stinky. Hop-a-Long with the bubble-gum-wad nose. With the almost-topple-every-step walk.

“I don’t know,” said Hop-a-Long. “It was brainless existence. People had to make excuses to live.”

It was sunshiny as usual in Astroland. It was a world of dazzlement and the frozen laugh, and of gigantic eyes with the pupils all the way to the right. A worm of gleam rested on every edge. And, you know that purple fog that sometimes coats shiny red things in the bright, bright, bright? It was that too.

“Life then was just who-cares forever. You looked out on all that stuff all mixed up with all this other stuff and you said, What’s the point? Who’s making any money here?”

In Astroland even the clouds were mechanical: electric motors and whirring cogs on the inside, cotton on the outside, and tiny, tiny propellers. Tuesdays and Thursdays were cloud-washing days, so then it was all sun, sun, sun. The purpose of the clouds was to create sunbeams. Just as the purpose of the sunbeams was to create worms of gleam. Just as dazzlement was the purpose of the worms of gleam. And dazzlement was a variety of fun. There was never any rain. Well, there was rain, but it was confetti. Everything had a purpose.

Hop-a-Long tapped him on the head with a fingernail: click.

“Love,” said Hop-a-Long. “Back before Astroland everything was love. The world was wasted by it. Do you know what love is? Love is a beard pretending to be cotton candy. You break-up everything and say it’s new-improved, better-than-ever—that’s what love is. It’s me down in the sewer hole dreaming about all the razzle-dazzle on the outside, but really there’s just this steamroller waiting up there to squash me flat. Crunch! Ka-RACK! Pow! Shardtown to the horizon!” 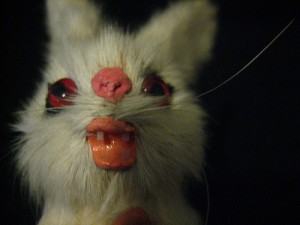 Stephen O'Connor is the author of the short story collection, Here Comes Another Lesson, which will be published by Free Press in August.