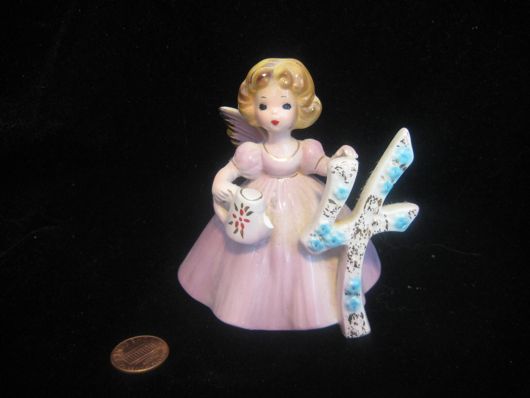 Significant Objects X Litquake: No. 4 of 5.

During our break between lessons, the girls gather round and ask what I did to deserve it.

They blink at me, their eyelids making chiming noises with each lower and lift.  Their mouths pucker into ohs so perfectly round that I have the impulse to stick something in them—a tarnished coin, the end of a bendy straw, or the tip of my finger.

Then, Thecla steps forward with a firm smile. She is so good. The bubbles blown by all the children in all the yards float up here and drift around her head, a crown of soap and breath. That’s how good Thecla is.

“But you must have done something,” Thecla says. “And only weeks away from your fourth year — from your time in the kiln.”

The others all nod, loosing identical puffs of cinnamon from their curls.

“No.” I shake my head, and it is not cinnamon, but sand that whips from my hair, spraying my classmates who flinch and rub their eyes. “I didn’t do anything. I’m pretty sure.”

The girls exchange puzzled looks. For some, the strength of their confusion is so great that they flutter a few inches up off the ground, until, realizing how rude this is to do in front of me, they sink back down, shamefaced.

“Maybe you talked back,” Esme suggests.

“Told someone about your nightmares?”

I shake my head emphatically, making more and more sand, a dust devil that whips around us in a lopsided circle.

“I don’t understand,” Thecla says. “When you behave, you’re rewarded. And when you’re bad, you’re punished. Everyone knows that.”

I shrug. I don’t know that.

My classmates reach back and grasp their own wings, pulling them forward to wrap around their bodies like cloaks or to fondle like hanks of long hair. They are frustrated with me. Lessons will start again any moment now.

“I know!” Josephine shouts, and the canaries that nest in her dress pockets poke their heads out and chirrup a tinny song of triumph. “Maybe you didn’t do something bad, so much as think something bad!”

“I bet you’re right, Jo,” Thecla announces, and the canaries re-launch their tune. “You must have thought something very bad to deserve this,” she says to me with little tsks at the backs of her words. “Probably about one of us.”

Esme tilts her head. “It wasn’t about me, was it?”

“A shame,” Thecla murmurs. “Customers will think you’re broken now. You’ll be left on the sale shelf for sure. At least you’ve learned your lesson about thinking bad thoughts.”

“See! That sounds like a bad thought right there!” Thecla says. “I knew there was a reason for this.”

The teacher calls, and, relieved, the girls hurry back to class, Thecla’s bubbles gleaming smartly.

I linger and pat a hand over my back. My fingers stroke the sleek and waxy feathers of my right wing, but then fumble at the left—a jagged, tufted stub. I ask myself the question that I’d hoped one of them might ask me: Did it hurt when he’d snapped it off? It’d made a loud noise, that’s for sure. But I wouldn’t say hurt. No, I’d say it felt more strange than painful, like something was being lifted away, something I’d only thought I’d needed. 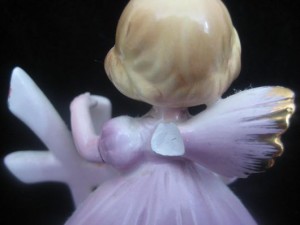 Katie Williams' first novel, The Space Between Trees, was released by Chronicle Books this June. She teaches writing at Academy of Art University.