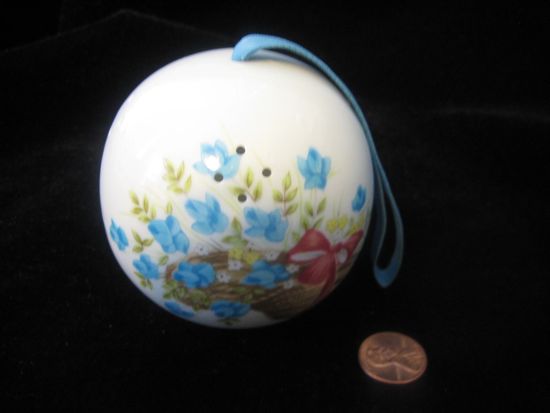 [The auction for this Significant Object, with story by Charles Ardai, has ended. Original price: $1. Final price: $20.50. ]

The telegram arrived too late. The morning mail had brought the box, wrapped in a double thickness of brown paper and covered with fibrous packing tape I’d had to dig out the heavy Wüsthof cook’s knife to slice through. Inside, upon a bed of cotton batting, lay a ceramic ball painted with images of flowers in a wicker basket and tiny, gold-bellied birds. There was a plastic stopper in the base, a loop of ribbon at the top, and a diamond pattern of pinholes on either side. I looked at the return address on the torn and crumpled wrapping: Gabriel Hunt, Trebišov District, Košice, Slovakia.

The illustrious Mr. Hunt, a centimillionaire and renowned world traveler…why, I wondered, would he send me this oddity? I had recently completed co-authoring a book with the man (by which I mean that I wrote all the words the book contained, save three: ‘by,’ ‘Gabriel,’ and ‘Hunt’), but that hardly explained the appearance in my mailbox of this rara avis.

The explanation arrived an hour later, in the form of a half-size sheet of paper bearing the logo of Western Union. “Charles,” the message read, “you will receive a package from me shortly; do not, repeat do not, open the object you find inside. I send it to you for safekeeping, so I beg you, keep it safe. Hang it, please, in a cool, dry place, away from noise and direct sunlight. Do not listen to it. Do not attempt to peer inside.

“You will be curious as to what the piece contains. I will tell you, so that you might avoid accidentally doing irreparable harm. This innocent-seeming container is the handiwork, Charles, of the renowned Slovak metaphysician and sculptress Mária Gruska. She fashioned it with clay from the basin of the Tisza River, the burial site of the great Hun chieftain, Attila. Some incantations followed – I don’t know the details, Charles, and since Gruska has recently passed on (rather violently, I’m afraid) I doubt we ever will. But incantations there were, and a pentacle inscribed on the ground, and certain other bits of ritual that resulted in the ancient chieftain’s soul being drawn back from whatever midnight realm it had so long inhabited and stoppered up in this spherical chamber.  The art on the outer surface is functional: as anathema to the inhabitant as holy water to a vampire, it keeps him penned inside.  The holes permit communication, but not escape.

“Gruska had it hanging, Charles, from a cast-iron hook in her cellar.  Her mansion was aflame when I found and rescued it, escaping mere instants before the building collapsed into a heap of rubble.

“Now it’s in your hands. I realize you may not believe that Attila is in there.  Humor me at least. I will take it off your hands when I return.”

I would have done as Hunt requested – very gladly. But by the time I read this I had already slipped a thumbnail beneath the stopper’s edge and, with a tug, removed it. It had come free with an audible pop and I’d felt a strange breeze, as though there’d been a window open nearby. There was a scent in the air as well, like roasting meat or burning wood. But it passed, and I’d thought nothing of it – until the telegram.

On his return, Hunt was inconsolable.

I have used the container ever since to hold salt. 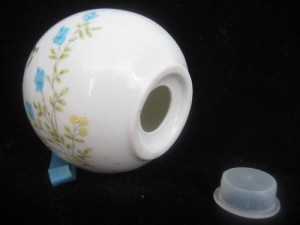 Charles Ardai is an Edgar- and Shamus Award-winning writer, editor of the Hard Case Crime series of paperback crime novels, and the co-author with Gabriel Hunt of Hunt Through The Cradle of Fear.