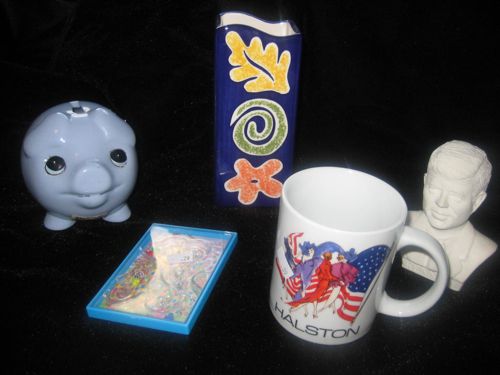 Click through to read the Significance of each pictured Object

Later today we’ll publish the winner of our Six-Word Contest with SmithMag. And later this week we’ll post our 100th Significant Object.

People have been asking: Is there a way to keep Significant Objects going in some new form when the original 100-object experiment ends? We’ve been giving this question some thought. It’s not anything we’d figured we should worry about when we started this adventure back in July. But since then, the response has exceeded our expectations. So it seems almost wrong to simply stop and disappear.

We do have some ideas about what Significant Objects, Version 2, and I’ll say more about that … tomorrow. Maybe you have thoughts? Leave them in the comments!

In the short term I can say this: Next week, while we’re waiting for the last of the auctions to close, we’re going to publish five of the runner-up stories from our contest with Slate. You won’t be able to bid on the BBQ Sauce Jar anymore (it’s sold), but you can still enjoy some of the first-rate fiction that contest yielded.

Speaking of your feedback — seriously, what are your thoughts about the future of Significant Objects?

6 thoughts on “The future (?) of Significant Objects (Part One)”