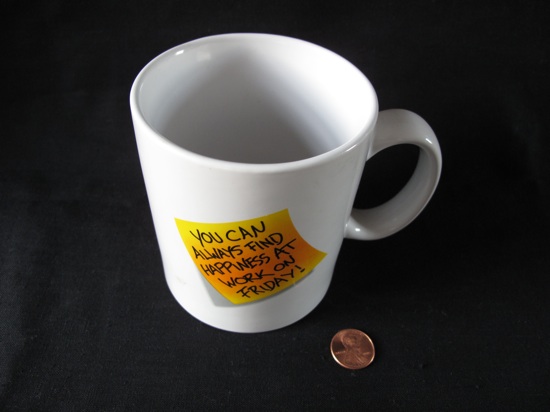 I think it was Ted Spain’s to start with, though I’m not sure. He used to take it to meetings, and on Fridays before the all-staff I’d see him filling it with gin from a bottle he kept in his second drawer.

No, serious! He knew I knew, too — he looked up once and I was staring at him like you’re looking at me, and he just sort of, you know — you want some? With a big smile on his face. I didn’t take him up on it, but sometimes I think I should have. I mean, pretty much that whole year before you got here, I should have.

Anyway. So Ted had it, and he did that pretty much every week for five months until he got laid off when they got rid of the design staff. Remember? Right before Easter, too. And when he left, on his last day, he walked by my cube on his way out and set it on my desk, and it was full, and he winked at me and that’s the last time I saw him.

So that’s kinda how the Death Mug became the Death Mug. When Lara got fired, her and Manny and me went to the parking lot and did about five tequila shots each from it, and then when Sharon left to go take care of her mom in Seattle, she brought in some box wine and a bunch of us went over to the Piper and sat on the patio and drank it, and she drank out of the mug. And then she came back after her mom died, and they laid her off about six weeks later, and we did it again, only me and Tracey brought the wine this time and we made sure it was good wine.

So I don’t know. I guess it’s a, a thing now. It’s the Death Mug. We break it out every time this happens, or whatever. Three rounds of layoffs, plus Lara and then Tracey. And when Bette left to marry Evil Eye — God, she drank like half a bottle!

Anyway. I was wondering if you’d want to meet me outside. I have some gin in my car. It’s been there since Easter.

And then, you know. I figured I’d leave it with you, right?

Dan Reines is a writer living on the grassy outskirts of Los Angeles, California.

One thought on “Friday Mug”