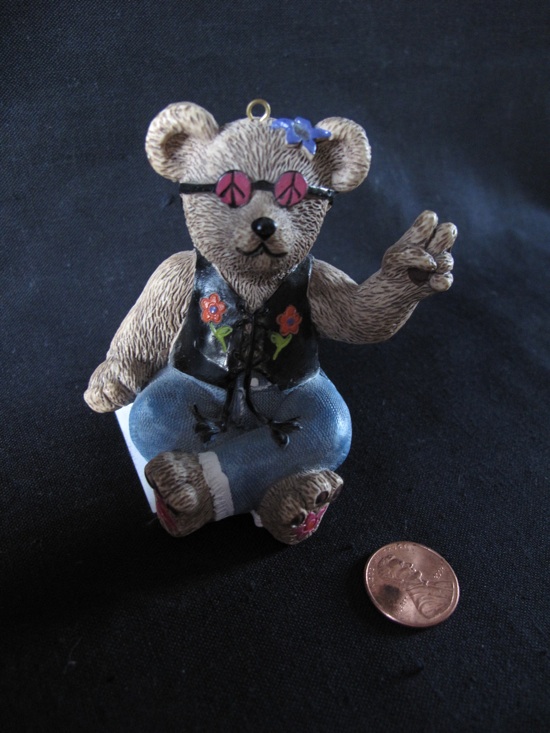 She’s Jewish, so why does she insist on giving me Christmas gifts? For that matter, why is she giving me a hippie bear Christmas tree ornament? I’m not a hippie. She’s certainly not a hippie. There is no hippie of our mutual acquaintance to whom this could be a fond or winking allusion. But it’s a long tradition: last year she gave me an enormous salmon-colored sweatshirt embossed with a puffy vinyl seagull, and the year before, a two-gallon tub of caramel popcorn. With her unerring instinct for soul-free objects, she’s naturally drawn to the microwavable, the Navajo-patterned, the vanilla-scented. There have been cake plates shaped like snowmen, eye-watering potpourri satchels, decorative jars of multicolored pastas, candles of every description. These things will not mellow or acquire sentimental cachet. It is not their destiny to become vintage. To look upon one of her gifts is to see its future in a free-box and, ultimately, a landfill.

Does that sound harsh? It isn’t meant to be. I know that, for her, to love is to give. But I’ve also seen the closet where she hoards piles of gift-wrapped junk, replenishing her stock on regular trips to the mall like a squirrel gathering inedible, mass-produced nuts. It’s a compulsion, and a lonely one. She doesn’t go to Goodwill, either; I know she’s spent good money on this bear — money she could have spent on bingo cards and Virginia Slims.

For something so bland, this hippie bear ornament is chockablock with signifiers that are hard to ignore. I can only assume it spoke to her of me in some way, or spoke of the connection between us, and I think that’s what depresses me most of all. This thing has nothing to do with us. It occurs to me that a shapeless lump of putty-colored plastic would have expressed more. Each one of the carefully rendered details — the blue jeans, the flowers, the peace signs, the tasseled string that laces its leather vest — each one subtracts a bit of meaning, until all that remains is a sucking hole of negative significance.

On the other hand, it’s the thought that counts.