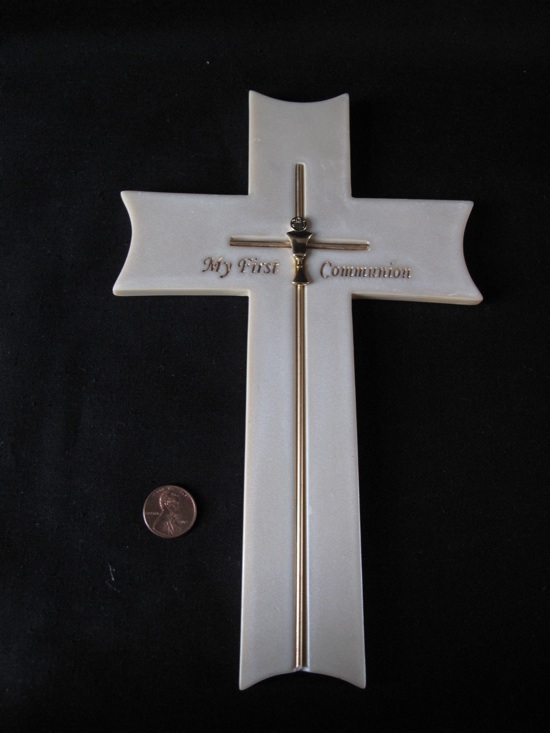 Shortly after I made my First Communion, my cousin Rodney showed up at my mom’s. He’d also just made his First Communion, though at a different church. It was so recent, I still had this plastic First Communion cross, a gift from my great-aunt, propped on my bookshelf. My mom always disliked my aunt, and had commented in some oblique way on the chintziness of the gift, as if it should’ve been a cross made of solid gold or poached elephant ivory or something, as if Jesus would’ve been psyched about that. I didn’t mind it, though.

Anyway, it turned out Rodney, that morning at church, had, in a rather impressive feat of legerdemain, only pretended to eat the communion wafer the priest had placed in his outstretched hands — only very old parishioners still took the wafer directly on their tongue — and instead had palmed the thing and snuck it home. It was a pretty motley act of civil disobedience, a nine-year-old’s equivalent of writing in a porn star for mayor or burning a twenty-dollar bill. Still, now he had this piece of Eucharist, which he unwrapped gingerly from a square of toilet tissue. He didn’t know what to do with it.

On the grass-colored carpet between us, the host, slightly speckled, looked like a bit of shell from a broken bird’s egg. I said how do they make them so perfectly round and flat. Rodney said there’s probably a factory upstate. I pictured a conveyor belt, with monks snatching up the bad ones. (You don’t want anyone getting a host that’s burnt, or cracked, or shaped like a profile of Nixon.)

Finally Rodney suggested that we could have a black mass. The host had been consecrated, after all. I thought this sounded like a cool idea. In a fit of inspiration, Rodney grabbed my Communion cross and flipped it upside-down, making a Satanic altar.

Upside-down, the gold chalice on the cross looked just like a bell.

Rodney said the way this would work was, you got to say a prayer, only it would be to Satan, so you could ask for anything, not just good things — you could ask for wishes God would not only not grant but actually punish you for thinking.

We dimmed the lights and closed our eyes. At one point, I opened mine a crack, and the light from my desk lamp was hitting the cross in a way that made it seem to glow. I quickly closed my eyes again. That was the first time I thought my evil prayers might be answered. But I was never able to levitate, and Tina George’s blouse never spontaneously popped open on the playground.

About six months later, when the most hated homeroom teacher at our school got cancer, Rodney did pull me aside and whisper that that’s what he’d prayed for. I didn’t believe him, though.

Still, you should be careful with this thing.

Mark Binelli is the author of Sacco and Vanzetti Must Die! and a contributing editor at Rolling Stone. He is currently working on a nonfiction book about Detroit.