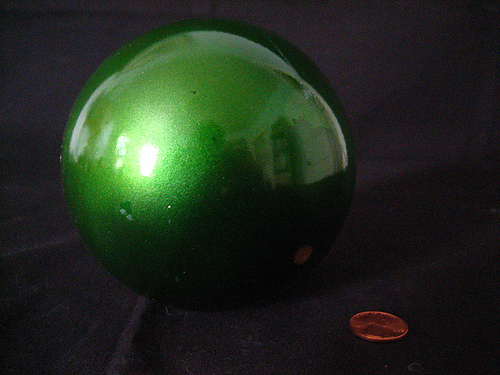 [The auction for this object, with story by Rebecca Coffey, has ended. Original price: 79 cents. Final price: $15.50. Significant Objects will donate proceeds from this auction to Girls Write Now.]

It was all because of what happened the Halloween she was eight. We’d had pumpkin soup and near-beer for dinner. The soup gave her gas.

But it also gave her a dream. A full moon was falling. Getting bigger and bigger as it fell, it made a wind that moved everything on earth in fast motion and that blew into Masie’s brain a vision of the shape of her life. She was going to die when the moon hit earth. Her life would be short. But considering that she’d get to see the world end, it would be unusually full. The shape of her life was going to be spherical.

Masie’s gas pains woke her before the moon could hit the ground. The next day, she started playing marbles alone every afternoon in the dust outside. “This game was brought to you by the number 8 and the letter O,” she’d announce at game’s end. She also wore my padded bras to give herself something round up top. Now, of course, she’s grown two big globes on her chest. Each morning, in a movie star voice, she says, “You, girls, are the shape of life,” and puts on her bra.

Well, the shape of life is also what spit bubbles, ants’ butts, bowling balls, and cat testicles are. Roundness is the whole deal for Masie. Spheres are best, but circles will do. Her favorite thing about Harry Potter is his glasses. Her favorite part of sadness is tears. My pills are what she likes most in our bathroom. Sitting on the pot, she pours them into her hand and watches them roll around.

The other night, she dreamed one of my green chloral hydrates got huge just like the moon did in her dream when it fell. But that’s not the night my chloral hydrate almost killed her.

Last night was the night. Happy Halloween, right? I offered to make pumpkin soup, but she wanted to order Chinese. It took her forever to eat Buddha’s Delight. She removed each snow pea from its pod and rolled it on her tongue. After, she had a Tootsie Pop. And when she got into bed, she dumped a whole sack of marbles around herself. She had her ants’ butts collection in a jar by her pillow, and hubcaps at the four corners of her room.

“Tonight is the night, Mom,” she said from under her covers. She wouldn’t answer when I asked, “For what?”

I took my chloral hydrate and fell asleep in my underwear on the couch.

But then the wind started to blow. Something made a noise. Masie’s gas? The moon crashing through trees? Whatever. Lucky me.

I woke not 20 minutes after Masie and I had gone to sleep. Which was good, because she had eaten all my green pills, three smiley face buttons, and an orange.

Rebecca Coffey's short fiction has appeared in McSweeney's, The Rumpus, The Revolving Floor, and elsewhere. She is a commentator on Vermont Public Radio, an award-winning documentary filmmaker, and her book Unspeakable Truths and Happy Endings was cited as an Outstanding Academic Book by the American Library Association's Choice magazine.

One thought on “Green Sphere”