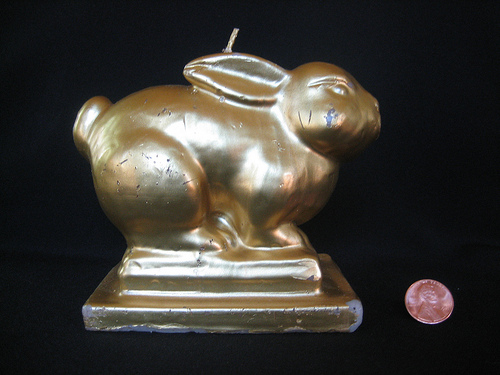 Instead of walking home the way I usually do — past Maple and cutting over on Ivar before getting to the river — I decided to save a little time and turned right, going down toward the church instead of around it. They were having a yard sale on that scruffy patch of grass on the side of the rectory, near where the old chestnut tree had fallen down back when I was in the third grade. The stump is still there, in fact, and I could see it as I was passing. So many names carved into its now smooth and weathered face. I slowed at the sight of all the mothers and children bunched together on the lawn — for such a dark November day, it seemed as if a street fair or something colorful like that was going on. I drew a little closer and poked around a bit, picking up a magazine or two, sifting through a stack of dishes. I moved on to the next long table, past a small mountain of discount clothing and there it was. The golden bunny. It was still chipped in many places, the fingernails of dozens of children who must’ve touched it over the years up there in His room. Marveled at it sitting on His desk while they waited for Him. Watched Him. My friend Tim swore it was ‘yellow’ but I knew the truth — perhaps I alone — that it was made of real gold and that there was an actual bunny buried deep inside the wax. He promised me that one day, if I was very good, that we would light it together and set the bunny free, that if it burned long enough and if I waited there in the dark with Him quietly enough, that it would emerge from its fiery prison and be mine. Mine alone to keep or to take home or to play with as I wished. That is why I kept going back in the beginning. At least in the beginning. The rest is unclear and haunts me still, coming back in fits and dreams and jobs that I can’t keep and endless bottles of liquor I consume. The rest is a lawsuit that remains tied up in court and my friends looking away from me when they see me coming or in the stands at local baseball games. The rest is all of that and more. The golden bunny, though, is untouched in my mind, sitting on the edge of His desk and calling out to me. Even from up there on His bed, with my head buried in a pillow I could still see it. Reach out for it. Touch its glowing, golden nose. Yes, even from there.

I bought the thing for fifty cents and hid it in the back of a drawer when I finally got home. Behind two stacks of old instruction manuals. I only bring it out when my wife is safely asleep in her room. 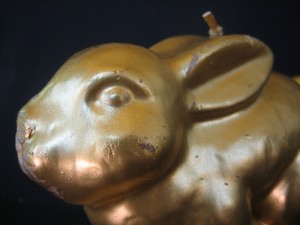 Neil LaBute is a writer/director of theater, film and television.