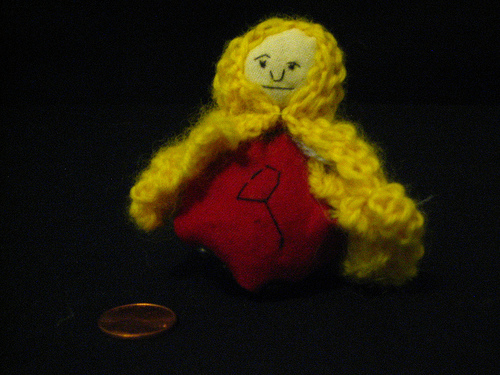 [The auction for this object, with story by Matt Sumell, has ended. Original price: free. Final price: $50.00. Significant Objects will donate the proceeds from this auction to Girls Write Now.]

This beautiful lady is a handmade-by-me replica of my sweet Grandma E. after she had a stroke four years ago. You can see I did a pretty decent job, considering I’d never sewn anything before, except for a soccer ball pillow that I made in home ec class in like the 8th grade and to be honest I didn’t pay attention cause I was secretly worried that if I did pay attention it would somehow turn me gay. And now that I think of it, there was a special ed kid in that class (we had to integrate thanks to budget cuts) who snuck up on and tried to strangle Rob Englebert with a length of yellow yarn, but yanked it too early so he strangled him just under his nose, in the mustache area, until the yarn broke. That kid, Powers I think his name was, went gay for real. At least that’s what my friend Tommy tells me.

When I was finished with the soccer ball and turned it in for a grade, Miss Palatta—who we all called Gotta Lotta Palatta cause she had a big ass—said that it looked more like a checkered heating pad and gave me an D. Anyways the thinking behind me hand-making a replica of my grandma was voodoo, but the opposite: instead of treating it bad and sticking pins in it and cutting its head off or whatever voodooers do to their dolls, I treated this one real nice; talked to it, petted it, groomed it, and even sewed Grandma’s favorite drink on the front, a martini. The one flaw is that I got a small amount of antibiotic cream and Vitamin A on its back when she got bed sores from not moving around enough—I blame the nurses—so there’s one or two small stains. Really though you can only see them if you lift the headscarf and know where to look for them in natural light.

Grandma E. was a super great lady who had a tough life with my grandfather, a half-Singaporian half-English complete a-hole who killed stray cats that wandered into their backyard with a shovel. She deserved better, I mean we all do, but she really deserved better. She lived through severe poverty, an abusive husband, a bunch of wars, diseases, a dead kid and Catholicism, but still she giggled a lot and always gave me candy and religious cards with five dollars in them. And how nice is that?

She passed away recently, and I see a lot of truth in what Beckett wrote to a grieving pal a long time ago: “I know your sorrow and I know that for the likes of us there is no ease for the heart to be had from words or reason and that in the very assurance of sorrow’s fading there is more sorrow.  So I offer you only my deeply affectionate and compassionate thoughts and wish for you only that the strange thing may never fail you, whatever it is, that gives us the strength to live on and on with our wounds.” And me getting rid of this doll is me gathering the strength to walk with a limp, and I can’t think of anything better than sharing Grandma E’s strength and endurance with someone who needs it more than I do.

Also, if you’re a fan of the Ziggy comics, take the scarf off and it’s pretty close!

Matt Sumell's short fiction has been published in Book Glutton, The Brooklyn Review, Noon, Electric Literature, and many more, and he's currently finishing up his first collection of short stories, Making Nice.

One thought on “Craft Doll”