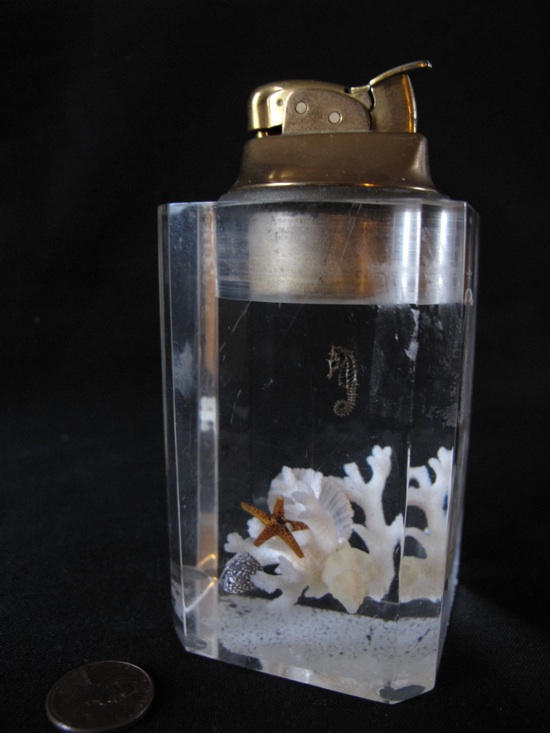 [The auction for this Significant Object, with story by Aimee Bender, has ended. Original price: $1. Final price: $36.]

When I was twelve, many decades ago, I was at a beachfront store in San Diego, one of those towns that smells like kelp and where all the men and women have hair so light they look a little like angels.

My parents were at the other end of the store buying shell jewelry to give to people back home. No one wears shell jewelry when you give it to them. Occasionally, you will see a woman who knows how to wear a shell necklace, but she is rare. My folks were about to split up; everyone knew. The trip had failed and the roads were forking.

In the corner, by the rows of abalone jewelry boxes, there was a bin of loose rocks. I dug my hand around in there, to feel the smoothness of polished rocks over skin. I had two dollars to spend, the last of my allowance for the trip. I had spent most of it on a blanket made of fishing net that is the worst purchase I have ever made in my life but for some reason I wanted more than anything at the time.

Deep down in the bottom of the rock bin, wedged in the corner of the wood drawer, was a tiny seahorse, petrified, looking almost like it was made of iron. As small and precise as a necklace charm. Once picked up, it rested directly in the center of my palm.

There was a curious feeling then, in me, in the store, in my palm, about what this was doing in some rocks at all, and I took it right to the counter and it was a dollar fifty, and with the remaining fifty cents I gave the store owner a tip in his tip jar because I had a feeling he was underselling. I held it in my hand the whole train ride home, and kept it close in a pocket or a bag for the whole next year during which my life changed four distinct times.

Close to three million years ago, near the lower Pliocene, in what is now Italy, this seahorse swam, washed up on rocks, died, became hard as iron, merged with silt, settled with stones, rested, traveled through pockets and bags, through history as we know it, making a landing in this polished rock bin in Pacific Beach.

When I was old enough to do such a thing, I had the seahorse embedded in plastic, to keep it safe. Then I had the plastic converted into the base of a lighter that I used to smoke cigarettes throughout my adolescence. I kept the lighter in my purse long after I’d quit, just carrying around that oldness, as old as the light from some stars that we see. I go look at those stars sometimes, on the beach, in the nighttime, with the edgings of surf lace and all those shells scattered on the sand, uncollected.

Aimee Bender is the author of three books: The Girl in the Flammable Skirt, An Invisible Sign of My Own, and Willful Creatures.