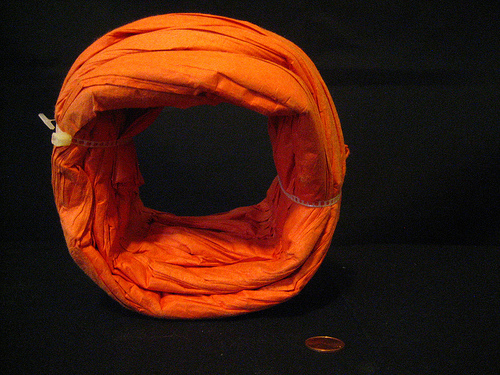 [The auction for this object, with story by Carole Maso, has ended. Original price: $1.99. Final price: $57.50. Significant Objects will donate the proceeds from this auction to Girls Write Now.]

The sun was rising and the tips of the trees, backlit, began to glow. The day commenced, dipped in fire. From her window she could see a saffron ribbon winding its way through the park.

As it moved closer now she saw it was a human thread– a line of monks, and she smiled.
She stayed seated and did not move, for she did not want to disturb the vision, if that is what it was, this little saffron thread of men walking, slowly widening now into a ribbon.

She was a small child when the artist had come to her city and had draped the great park in cloth. A multitude of saffron flags had been installed just beneath the tree line, following for miles the meandering footpaths. For sixteen days the park was swathed in orange.

The artist wrote that because it was temporary, there was a feeling of fragility and vulnerability about the flags in the park. It also creates in the viewer an urgency. Even immersed, those who saw it already missed it—for they knew it cannot stay. In Berlin the artist had wrapped the Reichstag in silver fabric and tied it in blue. For two weeks a flow of vertical folds was created, highlighting the features and proportions. In Paris the artist wrapped the Pont Neuf for fourteen days. Still looking out the window, she thought of that ancient bridge.

He had been there with her — suddenly she was sure of it. He spoke to her, though she could not yet speak back. On those days when the artist’s saffron gates graced the park, he was there. Afterward the others– diverted by grief, must have forgotten to mention it—nevertheless, there he was, a giant, bending to her.

Her father bent down to her, and from his head, light flared. And he smiled and spoke the fire alphabet to her and kissed her on the forehead. He knelt down, from those lofty, brilliantly colored heights to her in her stroller, and they were held in the orange gold hover of the world– framed by the winter trees.

Their lives at once so burnished, and so bright—

If you could wrap the Reichstag or the Pont Neuf –if you could wrap one million square feet of the coast of Australia, or encircle the islands of Florida, even for brief time, could you not wrap the father, she wondered, and keep him, encircled with twine, in brightly colored paper?

What was astonishing was that they were alive for a time together and that the air vibrated. The father drowned in saffron wheeling the baby safely through the burning world.

In her pocket now she fingered a piece of saffron paper, snatched from the art supplies cabinet. With it, she framed the sky, framing now an invisible, insignificant, passing part of existence—the place where her father might have once stood. She took the saffron paper to try and still the moment, hold it, encapsulate the empty space, vacated, where he was.

It was a small gesture. The monks had walked deep into the park and vanished. For a moment she held the paper in her hand, then put it down on the table next to the burning candle. 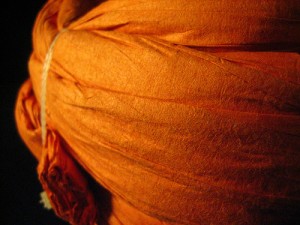 Carole Maso is the author of The Art Lover, Break Every Rule, and Defiance, among other books.