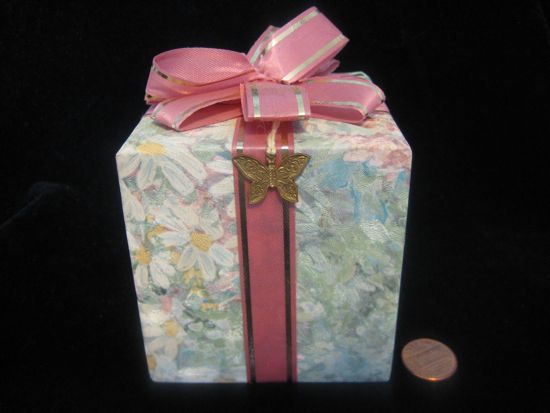 [The auction for this item, with story by Nicholas Rombes, has ended. Original price: 50 cents. Final price: $147.50. This story was chosen from the S.O. Fictionaut Group. Significant Objects will donate the proceeds of this auction to 826 National.]

Of course, the box.

How could he forget? The music box disguised as a gift box that everybody knew was a music box. She had kept it in the parlor (she called it that though no one knew what a parlor was) as if it had always existed, as if it had been part of the world forever, one of God’s First Creations, as if this box with this squashed pink ribbon and fake metal butterfly charm had been the very first object exchanged between Adam and Eve in the green-splendored garden.

He hunches low and forward on his bike, his 14-year old self, flying down the dusty back roads of this Great Midwestern Land, his head full of the smell of the algebraic girl he sat behind in math class just hours ago. Imagines himself Evel Knievel about to jump, cape flapping in the Bicentennial wind, over and across the minds of a hundred girls who would be there to kiss him and hand him flowers at the end. Yet still  the music box plays its same song over and over and over in his head, primitive as Mesopotamian pottery.

He pedals at impossible speeds, the limestone quarry falling off to his left, what seems a thousand feet deep, the turquoise water calm at the bottom, the rusted machinery on the distant shore like alien artifacts abandoned suddenly centuries ago.

He pedals harder, zooming through the abandoned downtown, past Valley Drugstore with its missing “D”, smiling at the stupid Rugstore jokes at lunchtime. Around the bend with the enormous white oak that they said Abraham Lincoln had stood beneath in July 1864 even though his science teacher, drunk, told the class one day the tree was only, at most, 120 years old.

At the top of the hill, her house. Lawn gone to pot. Weeds sprouting up in driveway cracks. Doors bolted shut. Hot sun against warped siding.

He into the house through the unlatched window around back. Dust on everything. Fridge still humming. Through the living room with its deep blue shag, empty now of furniture. The stale smell of ages.

Into the parlor, so-called. Cobwebbed.  All objects carted away, missing. Except for the music box disguised as a gift, there in the middle of the room, on the floor.

He touches the butterfly. Smiles. Cranks the small handle, afraid it will snap with age. Sits down Indian style. The music is her voice, speaking directly to him, as if she knew he would be here now, as if she knew that he — this nobody neighbor from the other side of the quarry — the boy with the scarred face who mowed her lawn and raked her leaves, would ride his bike furiously back, back, back to her. 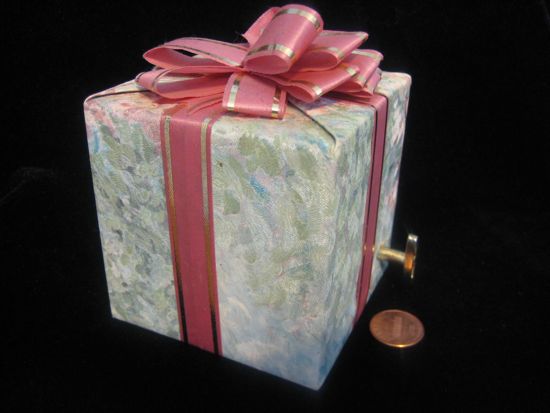 Nicholas Rombes is author of A Cultural Dictionary of Punk, 1974-1982. His ongoing novel, Nightmare Trails at Knifepoint, is available in a hand-crafted, serialized format.