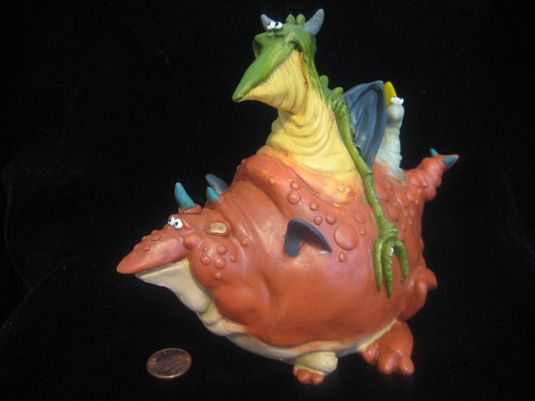 Significant Objects X Litquake: No. 2 of 5

Long ago, Flakumas, a stegosaurus, lay with Bardouf, a basset hound, and they begat Glumphakel, a bulbous-beaked baby, their first and only child. Although Glumphakel would go on to found our nation, his parents banished him at birth to waddle throughout the world alone, because of his back-warts.

And so Glumphakel roamed, plodding through wars and famines, feasts and coronations, oblivious to ceremony or circumstance—flopping one legless foot in front of the other with a gulpy cheer.

Legend says Glumphakel even trampled, unawares, straight through the middle of Emperor Wu’s wedding and unknowingly brained a guest with his spiked tail-stub. When confronted, the burnt-umber beast made such a show of contrition that Wu’s baffled courtiers not only let him go, but sent him on his way with a goodwill goatskin of yak-milk.

In the Tenth Moon of the Blue Age, Glumphakel was accosted in a marsh by the reptilian sorcerer Chrisyflas, a twig-limbed wastrel.

“I want to be inside you,” said Chrisyflas to the podgy father of our nation.

Glumphakel shrugged and said he didn’t mind, and so the saggy pterodactyl parted Glumphakel’s backfolds and sunk himself in for the long haul.

“My friend Lemp will ride along, too,” said Chrisyflas. “She is a dumb and broke-beaked albatross who won’t trouble you at all.”

“It’s just fine with me,” said Glumphakel, happy to fuse his flesh with a couple of kindred, googly-eyed pariahs.

The trio journeyed on, headed nowhere, and a century passed before Chrisyflas said, “Glumphakel, do you not see who I am?”

Glumphakel said he did not—that he could not see his own back—and besides it didn’t matter, all were welcome aboard.

“It’s me, your father!” said the scaly freeloader. “My real name is Flakumas. I tricked an elephant into giving me his ears, from which I fashioned these wings. Your mother was revolted, banished me and, in spite, took the earless elephant as her lover. The wings never worked, and I’m become an emaciated scavenger, with dumb Lemp here my only companion until you.”

A tear dropped from Glumphakel’s eye onto his warty beak, and then dripped here, in this parched desert, where it evaporated in an instant.

And from this invisible tear-spot sprung our nation—a landless nation of two, you and me. Take this statue: it shows our droopy forefathers frozen in their never-ending migration—eyes upturned in scared hope, creatures too small for their sagging skins. 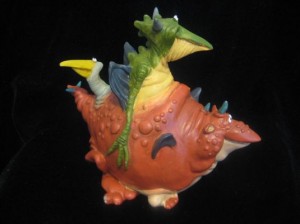 Rob Baedeker is a writer and performer living in Oakland, CA. He is a member of the comedy group Kasper Hauser, authors of SkyMaul: Happy Crap You Can Buy from a Plane , Weddings of the Times: A Parody (Kasper Hauser Comedy Group), and Obama's BlackBerry.

One thought on “Monster Toy”