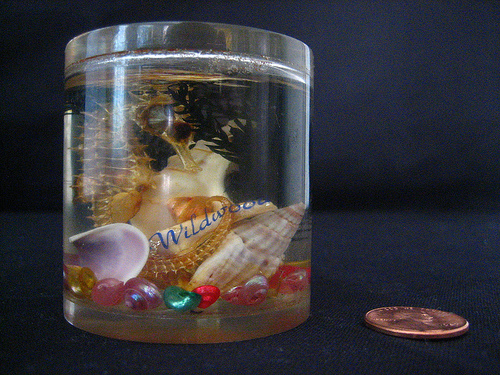 [The auction for this object, with story by Mark Jude Poirier, has ended. Original price: $1.00. Final price: $66.07. Significant Objects will donate the proceeds of this auction to 826 National.]

We drove to Wildwood Aquarium, left Alice at her apartment, even though it had been her idea to go. The week before, a German visitor to the aquarium had been killed, bitten in two by Sammy, the angry orca, as he held a fish for it. The crowd had cheered when the water turned red, then pink. People posted videos and photos on the Internet, but they had barely mentioned it on the news because the garbage strike was in full force then, and the city smelled like death.

They couldn’t very well just let Sammy go, and animal rights groups wouldn’t let the aquarium kill him, so he stayed there in the glass-walled pool, and people lined up for hours to see him. When we finally pushed our way to the front, Brad pressed his lips against the cold glass, blew up his cheeks and tried to attract Sammy the Killer with his tongue — ’til I reminded him how thousands of people had probably touched the glass right there after using the restroom and not washing their hands. I listed the problems Brad might suffer: “Impetigo, herpes, trench mouth, the flu, New Jersey gum rot, oral lice, lip chiggers, pink eye, the common cold, staphylococcus, pinworms, ringworm, hookworm, guinea worm, roundworm, tapeworm, and/or the clap. And mono.”

We stole Alice a souvenir because we were afraid not to. I had wanted to get her a Sammy the Killer T-shirt, emblazoned with the image of a cartoon Sammy with half a German tourist in his jaws, but they were too hard to steal, hanging high up on the wall, so high you had to ask an employee to get one down for you with a hook on the end of a stick. Instead, we snatched her something else.

“Where the hell is it?” Alice asked when we walked into her apartment.

Brad handed it to her, a small cylinder of Lucite or something, not much bigger than an ice cube, filled with water, a sad dead seahorse, and a few vibrantly dyed shells.

“Very funny,” she said. “Where’s my Sammy the Killer T-shirt?”

“Those were up too high,” I offered.

She looked at me, her lips freshly lipsticked, gunked, her eyes sunken into purple circles.

She threw it at Brad then, really hard, really fast, like her wrist was spring-loaded. It hit him in the mouth. “What the hell!” he screamed, blood dribbling from his chin. He spit slivers and shards of teeth into his palm. “Get me a glass of milk!”

I hurried over to the refrigerator. “Only soy milk,” I said. “I don’t think you should put your broken teeth in soy milk.”

“I’m lactose intolerant,” Alice said. She walked over to Brad, who cringed, thinking she might hurt him further. Instead, she picked up the souvenir, rinsed it in the kitchen sink, dried it on her denim skirt, and placed it on the windowsill.

You know, when the sun hit it, the seahorse almost looked alive. 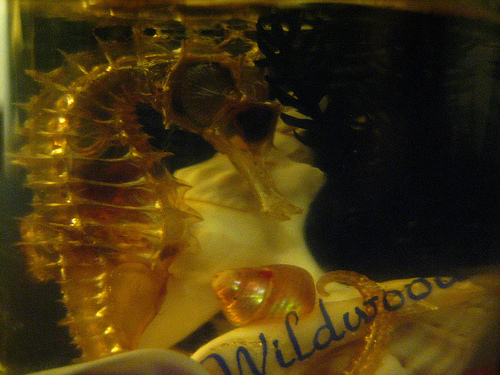 Mark Jude Poirier is the author of the novels Goats and Modern Ranch Living, as well as the story collections Unsung Heroes of American Industry and Naked Pueblo. In 2008, his first film, Smart People, premiered at Sundance and was released by Miramax.