[The auction for this item, with story by Kathryn Davis, has ended. Original price: $1.00. Final price: $51.00. Part of a special collaboration with Underwater New York, this object’s story shipped rolled into a vintage bottle found on the beach of Dead Horse Bay, Brooklyn. Proceeds from this auction go to 826 National.]

The sorcerer drove too fast. He always did but only because his mind was somewhere else, not because he was in love with speed. He was slow, really — sorcery is not a speedy business. What’re speedy are the events that make sorcery necessary. His mind was on his wife, Mary, who sat day after day at her sewing machine turning out small pink dresses, some trimmed in white eyelet, some in lace. Today he was more distracted than usual, this being the same block he’d been driving down the night he first saw her, a skinny girl wearing glasses, balanced on one leg like a stork. The sycamore trees were taller now, full of nests. A shadow leaped from between two parked cars. It was twilight and the papers on the back seat came flying in a white fan around him.

Mary wanted a child more than anything and he’d conjured one up, only to run it over — that was his first thought. Then he saw that what he’d hit was no human child but a yellow bear. It had leaped out though — he was sure of that. The car had inflicted no damage the sorcerer could see. When he picked the yellow bear up it was smiling at him, its little mouth slightly open and eager, revealing the tip of the tongue but no teeth. It held its forepaws against its chest in a posture the sorcerer knew signified submission. Mary wanted a girl and the yellow bear seemed more like a boy, but then again it didn’t have genitals. The sorcerer wiped it clean and took it home with him; every now and then he could hear a jingling sound come from it like it was a hard rubber cat toy with a bell inside. But the bear wasn’t made of hard rubber; it was made of something soft and warm more like skin.

Mary loved the yellow bear the minute she laid eyes on it; she held it to her cheek and smiled. “The baby’s tired. She wants to go to sleep now,” Mary told the sorcerer. She put it in one of the pink dresses and carried it upstairs with her, then she got into bed with it and turned off the light.

In the morning when the sorcerer brought Mary her breakfast tray of tea and toast he found her propped on her pillows, the bear at her breast. Mary was no longer smiling but had tears running down her cheeks. “I don’t know if I can do it,” Mary told him. The jingling sound was very loud now, ear-splitting. “She won’t stop,” Mary said. “She needs something from you, too. That’s how babies get made, in case you forgot.”

“She’s no baby, she’s a toy,” the sorcerer said, but when he went to show Mary the rubber seam running across the top of the bear’s head, the baby sank its teeth into his thumb clear to the bone.

Later, when Mary had cried herself to sleep, the sorcerer snuck the bear from her breast and filled it with something secret. “Pablum,” he told Mary when she asked, because now there could be no question, the child was alive and thriving and cute as a button. Buttercup, the sorcerer called her. But Mary knew better and treasured these mysteries deep in her heart. 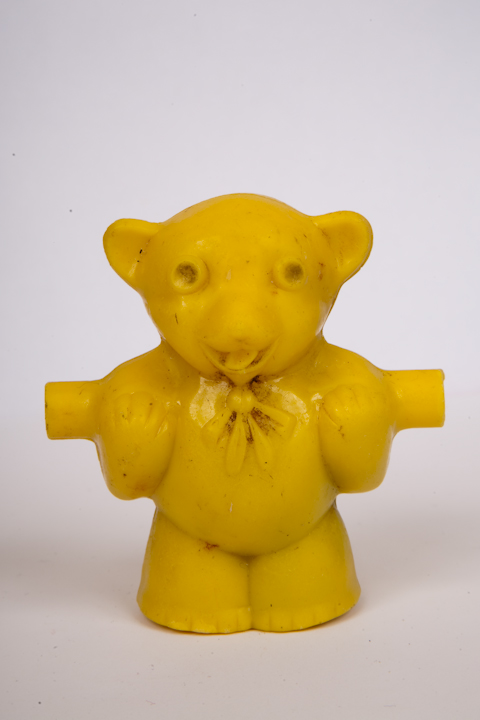 Kathryn Davis is the author of six novels, the most recent of which is The Thin Place.