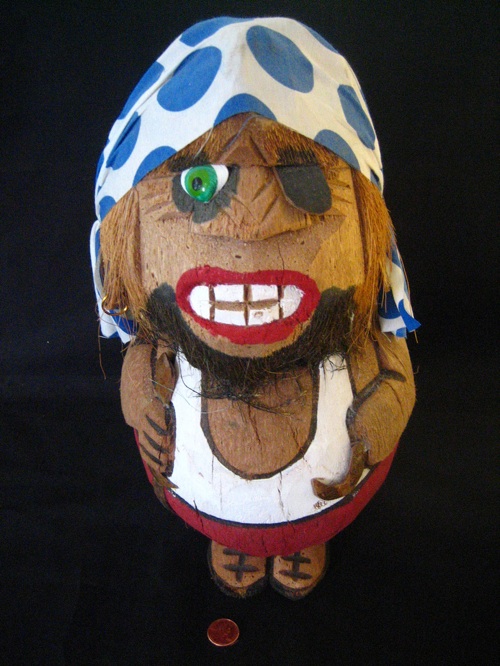 [The auction for this item, with story by Willy Vlautin, has ended. Original price: $2.99. Final price: $20.50. Significant Objects will donate the proceeds of this auction to 826 National.]

When he woke up in the middle of the night she was laying on top of him and he thought he was dying. It was summer in Houston and the air conditioner on full kept the bedroom just under eighty-five. He pushed her off and stared at the coconut pirate her father had given her before he moved in with a nineteen-year-old girl outside of Vinh, Vietnam.

She brought up her father a few times a week, and at least once a month she’d break down in fits over him.

“How could he leave us for a nineteen year old girl?”

“All men are perverts,” she’d cry.

“Jesus, not that again,” he’d say and then it would start and it would take a long time for it to stop.

He looked at the coconut and flipped it off.

The coconut cleared its throat and said, “Just wait, she’ll be on your ass day in and day out. She’ll take every cent you make and then complain about it. Did you notice how she quit her full-time job when you told her you were moving in? That weren’t no coincidence. All the women in their family are like that. Why do you think I got a job on a ship? I was seasick for five years before I got my legs. I woke up puking and went to bed hurling and still it was better than where you’re at.”

“What the hell are you talking about?”

“I have to watch. Begging doesn’t look good on you.”

“Christ,” the man said after a while. “If you’re so smart what should I do?”

“Where the hell am I going to go, I’m broke” the man thought.

“Move in with your brother in Shreveport,” the coconut said.

“I can read your mind. I told you not to buy her that car and the computer.”

“Some career, all she does on the computer is look at shit she wants to buy. And it ain’t fancy underwear for you.” The coconut laughed so hard he fell off the dresser.

“I’m alright,” he said. “Don’t worry about me, just get me back up. You guys got cockroaches the size of cars here.”

“All this worrying is making me hungry. I gotta get something to eat and I don’t want you coming with me.”

He set the coconut pirate on the bed next to the woman.

The man drove halfway to Otto’s Burgers before he turned around.

“Let me ask you son, why did you come back and save me?” The coconut was in the seat next to the man as he drove.

“I hate eating alone,” was all the man said.

Willy Vlautin is the author of three novels published by Harper Perennial. His latest, Lean on Pete, comes out this April.

One thought on “Coconut Pirate”