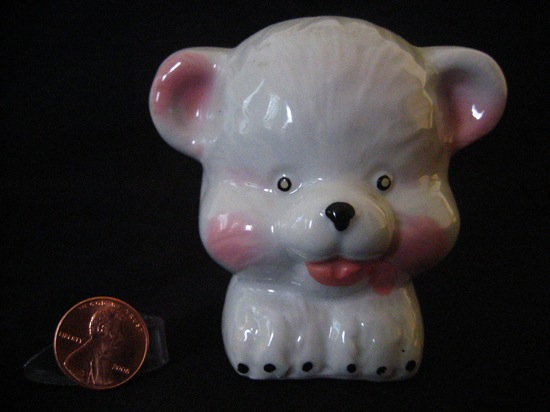 [The auction for this item, with story by Annie Nocenti, has ended. Original price: 99 cents. Final price: $36.00. Significant Objects will donate the proceeds of this auction to 826 National.]

This cold ceramic bear witnessed some electrifying poker hands. Saw leather-faced wide-brimmed Doyle Brunson run a ten three offsuit. Watched matchstick-thin Amarillo Slim bluff his fictive straight to the river. Set his beady eyes on longhair Chris “Jesus” Ferguson as he parsed stats hand after hand like a machine till small-baller Daniel Negreanu fried his circuits by chattering his all-in with a lowly three seven to a win.

When playing No Limit Texas Hold ’em, the greatest game in the world, some of us take faith in a lucky weight, a talisman that squats on our hole cards, a little trinket with an invisible antenna pulling for luck. Amulets that we rub and stroke. A dinosaur. A sneaky fox. A strutting rooster. A river stone shaped like a frog. Even an inch tall they pretend to be fierce warriors guarding cards and shazaaming the table. Bluff Daddy, he had his inane white bear; thing didn’t even have a body. Just a head on top a’ feet. Not even feet, just six black toenails. Tongue-hanging-out bear. Blank white eyes ringed in black. Holes in the head. It’s a salt shaker is what. Bluff Daddy is ever lifting his teddy between bets and tossing salt over his shoulder.

We’re in a big hand, me and him. My gut says he’s got ace-high rags on his way to a longshot flush at the river. I’ve been praying for this hand all night. Playing loosey-goosey, mixing up my play then closing the gate like a clam. I’m impossible to read. The way to lure suckers into a pot when you’re holding the nuts, you gotta spend time projecting false tells. Jiggle a leg, chatter too much or go stone mute, work it all night till the other players think they’ve got you pegged. The tell and reverse-tell is a maddening thing. When the tell is flipped, a monster pot can be stolen.

Just before the dealer turns the river card, that white bear puts the whammy on me. Tongue hanging out, face smeared in bear lipstick. No. Not lipstick. It’s bleedin’ out the mouth. I swear. Then Bluff Daddy hits his flush. His bad luck. He goes all in, he has to. You can’t beg off the high card flush. My stack is bigger than his; he can’t match my all-in. So I say to him, want to match it? I’ll take that bear. He shoves it right in and instantly blanches white as his bear. That donkey betrayed his own lucky charm. I mean, Bluff Daddy even looked like that bear. Like that bear was his lucky spawn.

I show him my full house. Pass the salt, I say. I won that bear, fair and square. After that hand? Me an’ my new bear, we dominate the table all night. 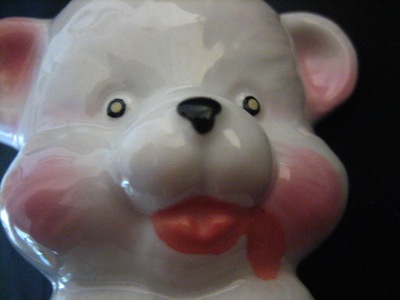 Annie Nocenti is a journalist and screenwriter. She shot two films in Baluchistan and currently teaches film in Haiti.

One thought on “Bear Shaker”