1) Annie Nocenti spent four months in Haiti, just after the 2010 earthquake, producing films, reportage, short docs, and a feature documentary — with her students at the Cine Institute in Jacmel. She wrote a short Typhoid Mary comic story for Marvel’s Girl Comics (illustrated by Molly Crabapple), and a short prose story for Daredevil Black & White (illustrated by David Aja). She’s written for HiLobrow about Jorgen Leth, Maya Deren, Nicholas Ray and Nichola Tesla (forthcoming). She is also writing short tales of Haiti after the tremblement for Hilobrow. And she is writing a counterfeit memoir about her experimental childhood and her four years on the poker circuit. 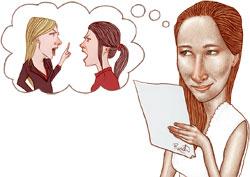 2) Lucinda Rosenfeld is hard at work on a new novel about three crazy sisters. She also continues to write the “Friend or Foe” friendship advice column for Slate.


Terms of Service: THE BOOK from Matthew Battles on Vimeo.

3) Matthew Battles is working on a sequel to Library, An Unquiet History. He’s the coeditor of HiLobrow, and he’s published several science fiction stories there in 2010: “For Provisional Description of Superficial Features,” “Billable Memories,” “The Gnomon,” and “Time Capsules.” He also wrote “The Book: Terms of Service” for the Barnes & Noble Review.